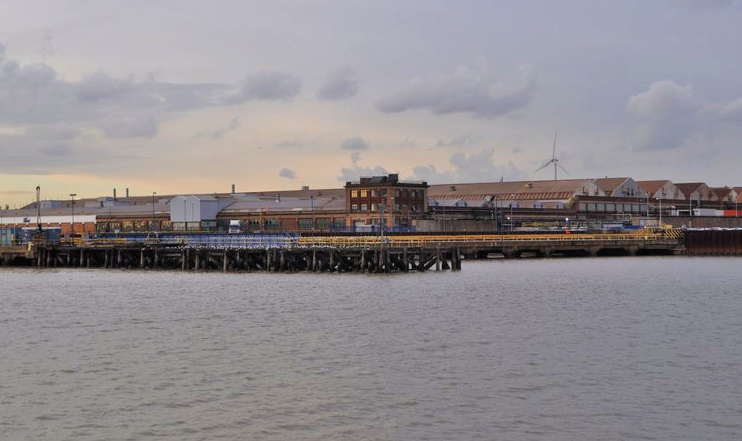 Dagen­ham’s name was first recorded around 687 – as Dæccan­haam, the homestead of a man called Dæcca. The ‘Dagenham Idol’, a wooden figure dug out of the marshes in 1922, is possibly from the Bronze Age. It is believed that it was buried as a talisman to help crops grow.

In 1205 Dagenham was large enough to have a chaplain – and the first incar­na­tion of the parish church of St Peter and St Paul was probably built at that time. The main street, called Crown Street, ran east from the church and crossed the valley of the Wantz stream. For several hundred years the appear­ance of Dagenham village did not change significantly.

St Peter and St Paul’s tower collapsed onto the nave in 1800, and all the church except the 13th-century chancel and late-15th-century north chapel had to be rebuilt. William Ford school was founded in 1841 and continues to thrive despite the social diffi­cul­ties of its catchment area. Dagenham Common survived longer than much of the heathland in the London area, but was enclosed after 1862.

After 1921 the village was rapidly hemmed in to the south by indus­trial devel­op­ment on Dagenham Marshes – notably in the form of the Ford Motor Company’s factory (shown in the photo­graph above*) – and then to the north and west by the huge Becontree estate. The resi­den­tial area was very poorly served by rail connec­tions until the extension of the elec­tri­fied District Railway to Upminster in 1932. Dagenham’s popu­la­tion increased more than threefold between the wars.

After the Second World War the council began to pull down decaying buildings and by the early 1970s almost every vestige of the old village had been replaced by municipal housing, while cottages on Church Street were demol­ished to invent a village green (shown in the small photo). The only ancient struc­tures are the parish church, 17th-century vicarage and Cross Keys public house, which began its existence as a hall house in the early 15th century.

With the exodus of heavy industry from swathes of the Dagenham Dock and Chequers Lane area, south Dagenham has the potential to become a major new township – but it may be some while before anything much happens on this brownest of brown­field sites.

In the south-west, where Dagenham meets Barking, the Castle Green locality provides a wide range of amenities to the residents of both districts.

At Dagenham East, what was once a wasteland of disused gravel pits and landfill tips has become a country park and nature reserve. The Dagenham area as a whole is nowadays char­ac­terised by very large and fairly feature­less parks with tightly packed streets of cramped housing in between.

The famous Dagenham Girl Pipers, the first all-female bagpipe band, was formed in 1930.

* The picture of the Ford plant at Dagenham (which nowadays only makes engines, though in vast quantities) at the top of this page is adapted from an original photograph, copyright Ashley Dace, at Geograph Britain and Ireland, made available under the Attribution-ShareAlike 2.0 Generic Licence. Any subsequent reuse is hereby freely permitted under the terms of that licence. The picture of Dagenham village has been released into the the public domain by its author, ‘MRSC’.