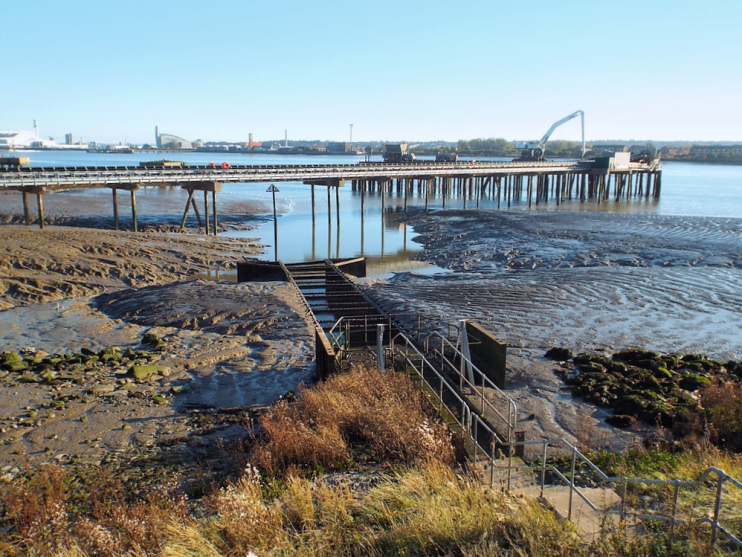 The old docks were constructed in 1887 around Dagenham Breach, now a constricted indus­trial lagoon but orig­i­nally a local beauty spot, created in the early 18th century by the Thames’ irre­press­ible habit of breaking through flood defences.

The docks’ founder was William Varco, who lived at Mardyke Farm in what became South Hornchurch. HMS Thunderer, the last warship built on the Thames, was completed at the docks in 1911 and took part in the Battle of Jutland five years later.

The Ford site is still home to a diesel engine plant but it seems likely that it will not be repur­posed when the company goes all-electric.

On Chequers Lane, Barking Power Ltd built a privately-funded elec­tricity gener­ating station, which began to supply power to the national grid from 1995. This power station closed in 2014 and the site has since been cleared in prepa­ra­tion for the relo­ca­tion here of Smith­field meat market, New Spital­fields fruit, vegetable and flower market and Billings­gate fish market.

The Dagenham Dock viaduct carries the six-lane A13 dual carriageway across the area.

The remainder of the Dagenham Dock area was until recently a motley collec­tion of oil, coal and molasses depots, glass reclaimers, car breakers and container compounds but the area is now under­going extensive regen­er­a­tion as part of the Thames Gateway master plan. This is bringing new employ­ment oppor­tu­ni­ties and thousands – poten­tially even tens of thousands – of new residents.

* The picture of a sluice near Dagenham on this page is modified from an original photograph, copyright Malc McDonald, at Geograph Britain and Ireland, made available under the Attribution-ShareAlike 2.0 Generic Licence. Any subsequent reuse is hereby freely permitted under the terms of that licence.