A residential locality with a wide variety of amenities, situated north of Ripple Road on the border between Barking and Dagenham 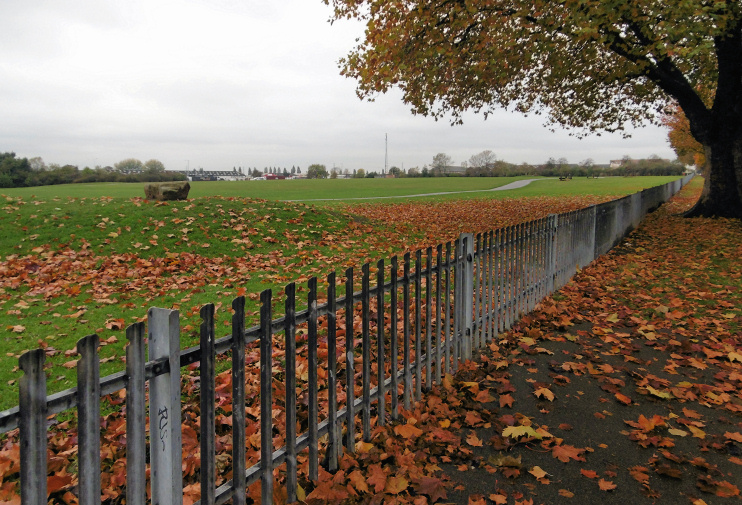 In this area the present-day A13 approx­i­mately divides what were once unin­hab­it­able Thames marshes from slightly higher ground where homes could be built. Farm­houses were loosely strung out along Ripple Road – notably Scrattons Farm in this locality – with little else to be seen between Barking and Rainham. And that’s how it seems to have been for thousands of years. Evidence of an Early Iron Age subsis­tence farm has recently been discov­ered in a corner of what is now Dagenham leisure park.

Castle Green takes its name from Ripple Castle, a minor mansion with a castel­lated front half, which stood at what is now the south end of Castle Road from c.1800 to 1930. The area is also known as Gores­brook, after a small stream that makes its first appear­ance in Gores­brook Park and flows south to Dagenham Dock. A gore was a wedge-shaped strip of land but also Essex dialect for a ‘muddy obstruc­tion in a water­course’ and it’s not known which meaning applied here.

After the demo­li­tion of Ripple Castle the area was built up as Barking and Dagenham expanded to meet each other between the wars. Gores­brook Village’s three 16-storey blocks signif­i­cantly increased the local­i­ty’s popu­la­tion density in the 1960s. This is an area with social diffi­cul­ties and over the past few years it has been the focus of a range of projects designed to improve the quality of life of its residents.

The Castle Green centre, which opened on Gale Street in 2005, unifies an extra­or­di­narily wide variety of community resources. These include a crèche and nursery, the Jo Richardson community school, a library, an adult college, a theatre, enter­tain­ment and confer­ence spaces, and sports and catering facilities.

East of the Castle Green centre there are sports grounds and, beyond those, Dagenham leisure park, which has a cinema, bingo hall, bowling alley and nightclub – and exactly the set of accom­pa­nying eateries that you might expect to find.

Gores­brook school opened in 2014 on the site of a former leisure centre. This is an entirely new insti­tu­tion, created in response to a rapid rise in the number of children living in the borough. When it reaches full capacity, the school will accom­mo­date up to 1,355 children aged 3 to 18.

* The picture of Castle Green at the top of this page is adapted from an original photograph, copyright Marathon, at Geograph Britain and Ireland, made available under the Attribution-ShareAlike 2.0 Generic Licence. Any subsequent reuse is freely permitted under the terms of that licence.