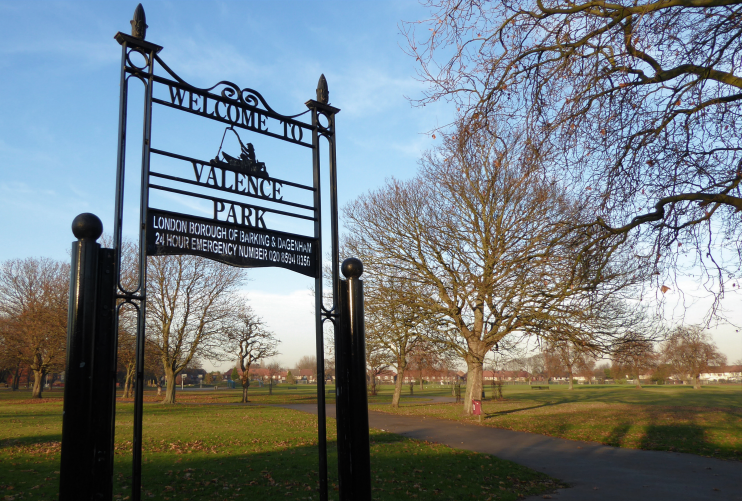 Much of this area was part of Parsloes, once the largest manor in Dagenham and the property of the Passelewe family in 1257. To the north, the common land of Becontree Heath was probably the meeting place of the court of the Becontree hundred, the medieval admin­is­tra­tive division that extended as far as Havering. Though the heath’s name was sometimes spelled ‘Beacon­tree’, it had no original connec­tion with beacons but is likely to have referred to the ‘tree of a man called Beohha’. It was first recorded in Domesday Book in the garbled form ‘Beuentreu’.

Begun in 1921, Becontree was the flagship of the London County Council’s ‘cottage estate’ house­building programme and was intended to accom­mo­date 100,000 people. It has been claimed the ‘Becontree’ spelling was chosen for the estate because ‘Beacon­tree’ was one letter too long to fit on bus desti­na­tion blinds. However, there is no evidence for this.

Most of the estate’s houses were constructed in red brick with tiled roofs, although many of the walls have since been pebble-dashed or stone-clad. A railway line brought materials from the Thames docks and 50 miles of roads were laid out.

The final incar­na­tion of Parsloes manor house was demol­ished in 1925 owing to its dilap­i­dated condition. Valence House, the district’s only other piece of heritage, was preserved as a showpiece for the Becontree estate and is now home to a highly regarded local history museum. Parsloes Park was opened to the public as part of the ceremony marking the inau­gu­ra­tion of the estate.

Many of the first residents came from Limehouse, where a slum clearance programme was under way at the time. By the 1930s, Becontree had grown larger than many provin­cial cities. But the LCC’s ambitions could not be fully realised on an estate so lacking in education, health­care and social facil­i­ties; and the housing, though adequate, was plain and monot­o­nous. Had it not been for the creation of the Ford motor works, unem­ploy­ment would have been an added burden.

Some of the estate’s early drawbacks have been overcome but the township is still not well-endowed with amenities. With the trends towards smaller families and more people living alone, Becontree’s popu­la­tion is now much smaller than orig­i­nally envisaged.

Most residents are white, but there is also a sizeable black British community, of Caribbean and – primarily – African descent, together with a growing Asian minority. Bengali, Urdu, Punjabi and Albanian are among the minority languages spoken.

According to research published in 2015, the RM8 postcode area – which is mostly Becontree – was at that time the most burgled place in Britain, where house­holders were 55 times more likely to be victims of theft than they were in Dundee. (See a outline of the RM8 postcode area on Google Maps.)

* The picture of an entrance to Valence Park at the top of this page is adapted from an original photograph, copyright Marathon, at Geograph Britain and Ireland, made available under the Attribution-ShareAlike 2.0 Generic Licence. Any subsequent reuse is hereby freely permitted under the terms of that licence.