Although it is postally a part of Romford and administratively mainly in the borough of Barking and Dagenham, Chadwell Heath really marks the easternmost extent of the Ilford district 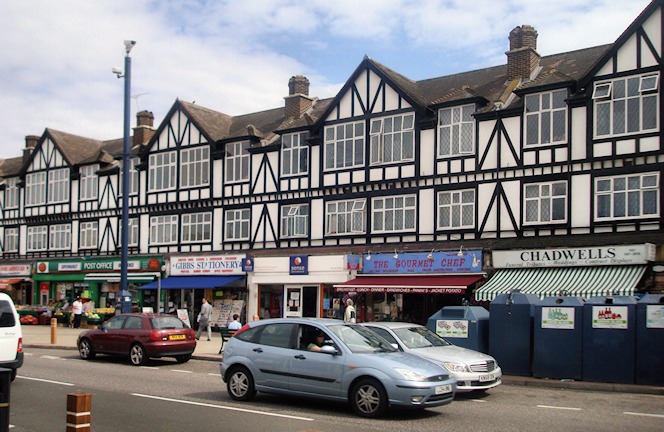 Records of Chadwell go back to the 14th century, although the heath was called Black­heath until a little after 1600. ‘Chadwell’ is almost certainly a corrup­tion of ‘cald wielle’, Old English for a cold spring, so the asso­ci­a­tions with St Chad are wishful thinking. The water from the well was said never to have dried up and to have been good for eye complaints – which was a claim often made for spring water.

Whalebone Lane is so called because of the arch made out of a pair of giant ribs that stood for two centuries at a tollgate on the Romford Road, the whale in question having been stranded in the Thames in 1658.

The heath was enclosed by the Crown in 1860 and part of it survives as St Chad’s Park, the oldest park in the borough of Barking & Dagenham. The district now covers a much larger area than did the original heath, because it has absorbed the neigh­bouring hamlet of Chadwell Street (which is the part within the borough of Redbridge).

The arrival of the Great Eastern Railway in 1864 brought some modest growth to the settle­ment and St Chad’s was founded as a chapel of ease to the church of St Peter and St Paul, Dagenham. The present church was built in 1895 and its clock tower was added soon after­wards to mark Victo­ria’s diamond jubilee. There are plans to extend and modernise the church, and to fund this project by building a small block of flats on the site of the church hall.

Suburban devel­op­ment began in earnest at the end of the 19th century and most of the present housing stock dates from between the world wars. Shown in the photo­graph above,* Tudor Parade was built on the south side of the High Road in 1938.

The two halves of Chadwell Heath exhibit different socio-economic char­ac­ter­is­tics. Home ownership (usually with a mortgage) is highest on the Redbridge side. The part that lies within Barking and Dagenham has a higher propor­tion of white, working-class council tenants. The district’s principal employer is the Dairy Crest milk processing plant on Selinas Lane, which doubled its capacity in 2001.

West Ham United’s Chadwell Heath training ground is a modest facility located off Saville Road, used by the devel­op­ment squad, under-18s and women’s team. The first-team squad has trained at Rush Green since 2016.

Chadwell Heath has briefly been home to the 18th-century feminist Mary Wollstonecraft and the boxer Frank Bruno.

The fictional Sir Chadwell Heath made a fleeting appearance in a 2010 episode of the American TV show Family Guy.

* The picture of Tudor Parade, Chadwell Heath, on this page is adapted from an original photograph, copyright Stacey Harris, at Geograph Britain and Ireland, made available under the Attribution-ShareAlike 2.0 Generic Licence. Any subsequent reuse is freely permitted under the terms of that licence.