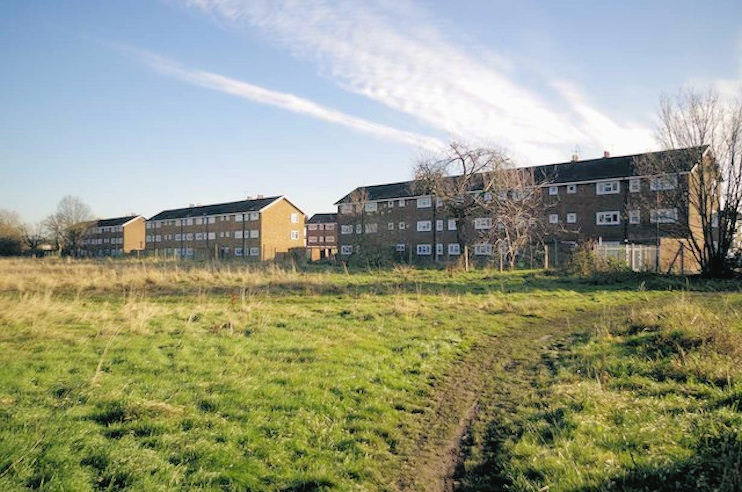 The hamlet, with its green where the rushes grew, was first recorded in 1651 and retained a concen­tra­tion of small farms until the late 19th century. In 1871 the Romford burial board opened a cemetery on Crow Lane to replace the former parochial graveyard. The first resi­den­tial devel­op­ment was the Birkbeck estate of 1885, consisting of West Road, Wolseley Road, Grosvenor Road and Birkbeck Road.

Rush Green hospital opened in 1900 as an isolation unit for Romford, Dagenham and Hornchurch and was enlarged to become a general hospital after the creation of the Becontree estate.

Romford council built some of its earliest houses in Rush Green in the 1920s. A mission hall was provided at Rush Green in 1946 and the brown-brick St Augustine’s church was built on Birkbeck Road in 1958, later gaining its own parish made up of corners of Romford, Dagenham and Hornchurch.

Rush Green College was estab­lished in 1961 and has since expanded to become the main campus of the voca­tion­ally oriented Barking & Dagenham College.

The area has seen signif­i­cant housing asso­ci­a­tion building in recent times, and there has been a small increase in the size of its ethnic minority popu­la­tion. Rush Green hospital closed in 1995 and its site has now been covered by houses arranged in a series of cul-de-sacs with flowery names.

In 2009 West Ham United bought the former Ford sports ground on Rush Green Road and rede­vel­oped the 29-acre site as a training facility, which has been used by the first-team squad since 2016. West Ham’s women’s team play their home fixtures at the facility’s stadium, which is located just beyond the western edge of the map below.

Despite the open spaces that flank it on most sides, Rush Green feels like an untidy part of east London’s periph­eral sprawl. The fact that it straddles two boroughs may have contributed to the local­i­ty’s unfocused form. (Click here to see the borough boundary on Streetmap.)

The entertainer Max Bygraves lived on Thornton’s Farm Avenue after the Second World War and performed in local pubs.

* The picture of Rush Green Gardens on this page is adapted from an original photograph, copyright Glyn Baker, at Geograph Britain and Ireland, made available under the Attribution-ShareAlike 2.0 Generic Licence. Any subsequent reuse is freely permitted under the terms of that licence.