A shopping destination and the ‘capital’ of Havering since the Middle Ages, situated five miles east of Ilford 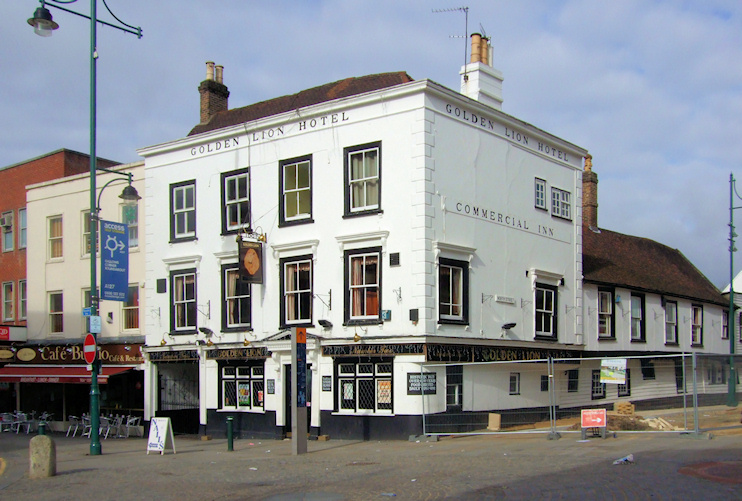 Romford’s name was first recorded in the mid-12th century and probably referred to a broad (or ‘roomy’) ford across the Mercke-dych or Markediche (‘boundary ditch’, which was later called the River Rom locally and the Beam River further south).

The settle­ment initially evolved around a chapel dedicated to St Andrew that was in existence by 1177. This was located to the south-west of the modern centre, in the vicinity of what later became Oldchurch Park.

Henry III granted Romford the right to hold a market in 1247 and added permis­sion for a Whitsun fair three years later. The focus of the village shifted to the new market­place, whereupon it is said that the chapel was swallowed up by an earth­quake, although its bells could still be heard on St Andrew’s Day. Seismic event or not, the old chapel was ruined beyond use by the end of the 14th century and a new church was built in the market­place in 1410, and dedicated to the Virgin Mary and St Edward the Confessor.

By the 15th century the market was well-known for the sale of leather goods made in nearby Hornchurch. The prover­bial Essex advice that one should “go to Romford to be new-bottomed” referred to the market’s repu­ta­tion for well-made leather breeches. From the 17th century it became a very large agri­cul­tural market, selling farm tools, livestock, fruit and vegetables.

As a coaching halt on the London to Colch­ester road, Romford’s inns and hotels flour­ished. Shown in the photo above, the Golden Lion dates from the 16th century (when it may have been a galleried inn), though its Market Place frontage is early Victorian. Fortu­nately it survived a plan to demolish it in the 1950s. Edward Ind started a small brewery at the Star Inn in 1799 and later joined forces with Octavius and George Coope to form a part­ner­ship that became one of the largest brewers in the country.

The town was still small and its environs almost entirely agri­cul­tural when the Eastern Counties Railway arrived in 1839, boosting both the market and the brewing industry. Landowners began to sell off their estates for suburban devel­op­ment in a protracted process that began with the now-vanished New Romford and Laurie Town, to the west and east respec­tively, and continued well into the 20th century with schemes such as Marshalls Park to the north.

The Anglican parish church of St Edward the Confessor was built on the site of its prede­cessor in 1849–50. The Catholic parish church, also dedicated to St Edward,† was rebuilt soon after­wards in Park End Road. In working-class New Romford a new incar­na­tion of St Andrew’s was completed in 1862.

From the 1920s onwards the town centre profited from the arrival of new branches of national retailers alongside long-estab­lished local firms centred on the so-called ‘Golden Mile’ of South Street and North Street. Here and in the High Street, cottages and slum terraced houses were demol­ished to make way for wider thor­ough­fares and modern commer­cial premises. At the same time, light indus­trial units appeared on the outskirts, espe­cially along the Eastern Avenue, north of which a new township mush­roomed around Collier Row.

While the resi­den­tial district expanded in every direction, enlight­ened devel­opers and coun­cil­lors ensured that a string of green spaces garlanded the growing borough, a status it attained in 1937.

The town centre was rede­vel­oped after the construc­tion of the ring road in the late 1960s, and parts have since been rede­vel­oped all over again. The Ind Coope brewery closed in 1993 and much of the site lay idle for almost a decade. Some of the periph­eral brewery buildings were preserved, while a large area was razed and replaced by blocks of flats and a shopping and leisure complex called The Brewery (and its 1774 car parking spaces).

Nearby there are the inde­pen­dent traders of Romford shopping hall and two other malls: the Liberty and the Mercury. Romford market is open on Wednes­days, Fridays and Saturdays. The town centre is also one of the most popular ‘pubbing and clubbing’ desti­na­tions in outer London.

Queen’s hospital was built in 2003–6, consuming most of Oldchurch Park. Havering museum opened in 2010 at a corner of the old brewery site. To the west, Romford greyhound stadium has races on Monday, Wednesday, Friday and Saturday evenings, and Thursday and Saturday daytimes.

According to a YouGov survey in 2020, only 34% of Londoners consider Romford to be part of London, compared to 46% who do not.

In the late 1660s the colourful adventurer ‘Captain’ Thomas Blood lived at an apothecary’s shop in Romford under an assumed name. In 1671 he almost succeeded in stealing the crown jewels.

† Edward is pretty much the patron saint of Havering, for reasons explained in the article on Havering-atte-Bower