The northernmost extent of Romford’s mini-conurbation, with green-belt parks and farmland on most sides 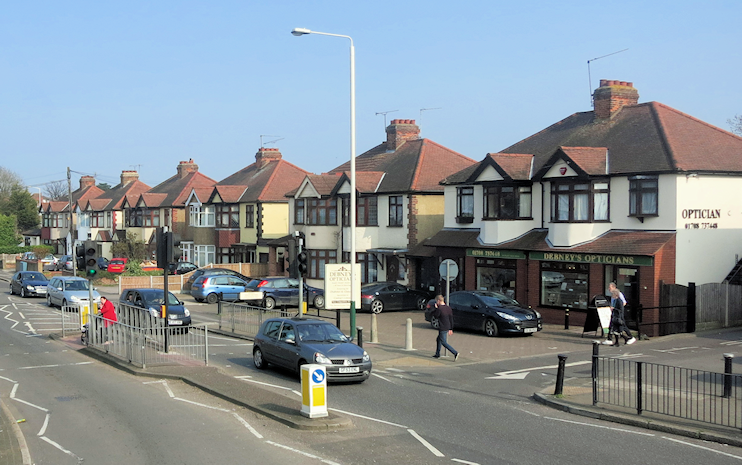 Colliers were active here in the 15th and 16th centuries. These were charcoal burners, not miners, making their living from the forest that covered most of the manor of Gobions, also known as Uphavering. A manor house called Great Gobions lay on the south side of Collier Row Common, while another house called Gobions stood on the common’s east side.

The hamlet of Collier Row had 56 houses in 1670 and five inns were recorded a century later. The common land was enclosed in 1814 and a new road replaced an old track leading to Noak Hill. During the agrarian boom of the mid-19th century, many farm­houses were built or rebuilt and the opening of Romford station attracted some wealthy Londoners. A mission church was built for the village in the 1880s.

Until the opening of Eastern Avenue in 1925, Collier Row remained a rural village, surrounded by fields of clover and hay.

Improved access to London, combined with the outward growth of Romford, was the impetus for a major programme of spec­u­la­tive construc­tion that lasted until after the outbreak of the Second World War.

A shopping centre was provided at the top of Collier Row Road, with a cinema that did not survive the advent of tele­vi­sion – and is now a Tesco Metro. In response to the area’s explosive growth, two more Anglican churches were built before and after the Second World War and Corpus Christi Roman Catholic church opened in 1965.

Very few residents of Collier Row come from ethnic minori­ties and the educa­tional standards agency Ofsted has commented of one local school that its pupils “are not well enough prepared for life in contem­po­rary multi­cul­tural British society.”

* The picture of Chase Cross Road, Collier Row, at the top of this page is cropped from an original photograph, copyright Des Blenkinsopp, at Geograph Britain and Ireland, made available under the Attribution-ShareAlike 2.0 Generic Licence. Any subsequent reuse is freely permitted under the terms of that licence.