The south-eastern part of Collier Row 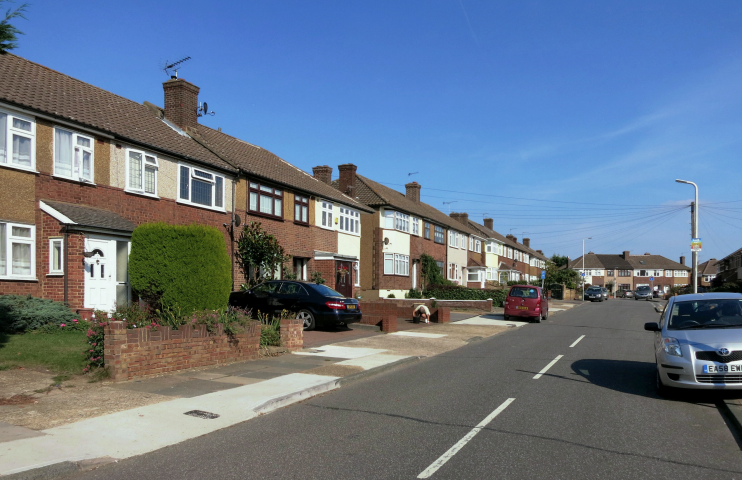 Rise Park’s name is a modern invention based on the old local name Rise­bridge, which was first recorded in the 13th century as Rise­bregge. This probably derived from Old English words referring to a causeway made with brushwood, which would have helped wayfarers traverse the marshy ground here.

Much of Risebridge’s farmland was acquired during the First World War by Tommy England, a local trader and property spec­u­lator. Despite his own surname, England gave most of the new roads names derived from the geography of Scotland. To the west of Rise Park, Lawns Way and Lawns Park are named after the former Lawns House, the area’s only large property in the 19th century.

House­building in Rise Park started in the 1920s and accel­er­ated in the 1930s. England donated the land for the 23-acre public park, which opened in 1937. In the same year the Rise Park estate went on the market, through local agents Hilbery Chaplin.

The promo­tional liter­a­ture proclaimed that with its rural atmos­phere and various different types of houses this was “undoubt­edly one of the most attrac­tive estates in Romford … For the housewife who requires less work and does not wish to climb stairs there are bungalows, detached or semi-detached.” Prices started at £610 freehold.

The area suffered bombing during the Blitz and saw further building after the Second World War, with another flurry more recently.

Rise Park infant and junior schools were built on Annan Way in the late 1950s. The schools converted to academy status in 2014 under the aegis of the Rise Park Academy Trust.

The picture of Glenton Close on this page is adapted from an original photograph, copyright Des Blenkinsopp, at Geograph Britain and Ireland, made available under the Attribution-ShareAlike 2.0 Generic Licence. Any subsequent reuse is hereby freely permitted under the terms of that licence.