A real village on a real hill, Noak Hill is perched amidst rolling farmland in the far north-east corner of Greater London 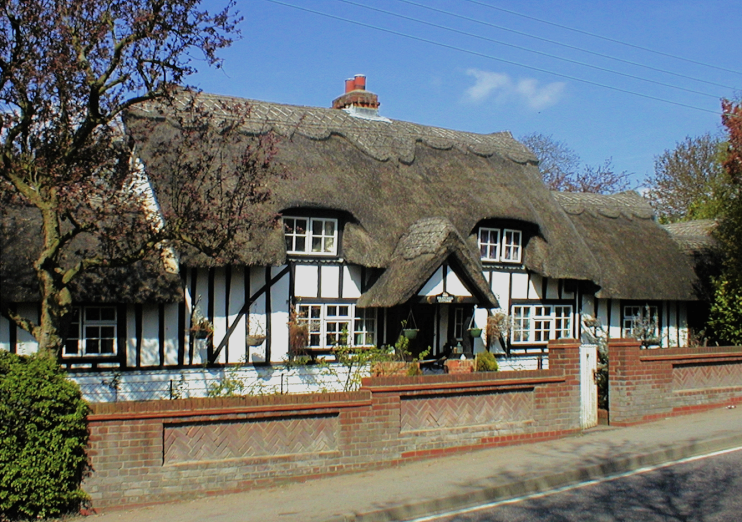 Noak Hill’s name was first recorded in 1490. ‘Noak’ signified ‘(the place at) the oak tree’. According to David Mills in his Dictio­nary of London Place Names, “This was no doubt the home of Richard ate Noke, that is ‘(living) at the oak tree’, recorded in a local document c.1290.”

When the common land here was enclosed in 1814 an area of Roman tiles ‘300 paces long’ was discovered.

After enclosure, the land was bought up by the Neave family, who also acquired most of what is now Harold Hill. Richard Neave was an 18th-century merchant who made his fortune from trade with the West Indies.

The late 17th-century Deer’s Rest, on the edge of Harold Hill, was orig­i­nally called the Goat House, became the Bear Inn around 1715 and gained its present name in 2019. Sir Thomas Neave acquired the inn in 1820. It has been much extended and altered, which has prevented it from qual­i­fying for listed status, though it’s on Haver­ing’s asset register of buildings of local heritage interest. The original part of the building can be iden­ti­fied by its arched windows.

The Neaves built the attrac­tive red brick church of St Thomas in 1842, which was followed by a school­house six years later. The latter has since been exten­sively altered but retains many original features.

Until the 1920s Noak Hill was a village of agri­cul­tural labourers and Neave family servants but most residents now commute to work elsewhere. Although within audible distance of the M25, Noak Hill retains weath­er­boarded and thatched cottages, several of which are grade II listed, including Rose Cottages, Holly Tree Cottage, Old Keepers Cottage and Thatched Cottage, which is shown in the picture at the top of this article.

Having served for a while as a restau­rant, the old school­house briefly reverted to educa­tional use in the early 21st century before once again closing. Somewhat surpris­ingly, it’s now a Radha Krishna temple.

To the south-east is Dagnam Park, known locally as the Manor and formerly the grounds of Dagnams, the Neaves’ mansion, which was demol­ished around 1952.

During the 1960s the Bear boasted a menagerie (complete with bear) that was claimed to be the largest in the London area outside Regent’s Park.

* The picture of St Thomas’ church on this page is slightly modified from an original photograph, copyright Sludge G, at Flickr, made available under the Attribution-ShareAlike 2.0 Generic Licence. Any subsequent reuse is freely permitted under the terms of that licence.