William Hogarth was the greatest London artist of the 18th century. Born in Smith­field in 1697, he was appren­ticed at the age of 16 to a silver-plate engraver.

Within a few years he had gone into business on his own, at first engraving book plates but soon producing portraits, satirical prints and vividly populated narra­tives of London life, in which he frequently mixed the comical with the grotesque, most famously in A Rake’s Progress (now at Sir John Soane’s Museum) and Marriage à‑la-mode (now at the National Gallery).

In 1729 Hogarth married Jane Thornhill, daughter of Sir James Thornhill, the artist whose crowning achieve­ment was the Painted Hall in Greenwich.

Four years after their marriage the couple moved into a house that stood at the south-eastern corner of Leicester Fields (now Leicester Square). This remained their main home for the rest of their lives.

From 1749 William and Jane spent most of each summer in their “little country box by the Thames” – a house built in the 1710s in a corner of a walled orchard at the edge of Chiswick Common Field. The Hogarths extended the property to make room for their relatives to stay here.

William Hogarth died in 1764 and was buried in St Nicholas church­yard, a short distance to the east of the house. The artist’s tomb bears a poetic epitaph written by his friend David Garrick.

After Hogarth’s death the house was used by members of his family until 1808 and was after­wards let to a varied succes­sion of tenants. It was put on the market in 1900 and a group of artists and writers tried – and failed – to raise the money to acquire the property and preserve it as a memorial to Hogarth.

Fortu­nately, Lieu­tenant-Colonel Robert Shipway of Grove House, Chiswick (who had more money than all the artists and writers put together) was persuaded by his wife to buy the house and have it restored. Hogarth’s House first opened to visitors in 1904 and five years later Shipway presented it to Middlesex county council.

Hogarth’s House has since been restored twice more, first after it was severely damaged by enemy action in 1940, and again after a fire in 2009. The house and its garden wall are grade I listed.

By the end of 2019, assuming all goes to plan, an “elegant and honestly modern” annexe will open, south of the house, providing improved amenities and a learning centre. It will be linked to the house’s 20th-century exten­sions by a glazed lobby with a curving front wall that follows Hogarth’s line of beauty. This is part of the Mulberry Garden Project, which will also focus on improve­ments to the grounds. For more on the project, see the William Hogarth Trust’s website.

Because it’s just a small home with rela­tively few trappings (other than plentiful Hogarth prints and infor­ma­tion boards) you may not choose to linger long here. But if you’re in the locality anyway (perhaps to see Chiswick House or tour the Griffin Brewery) Hogarth’s House makes a delightful diversion. 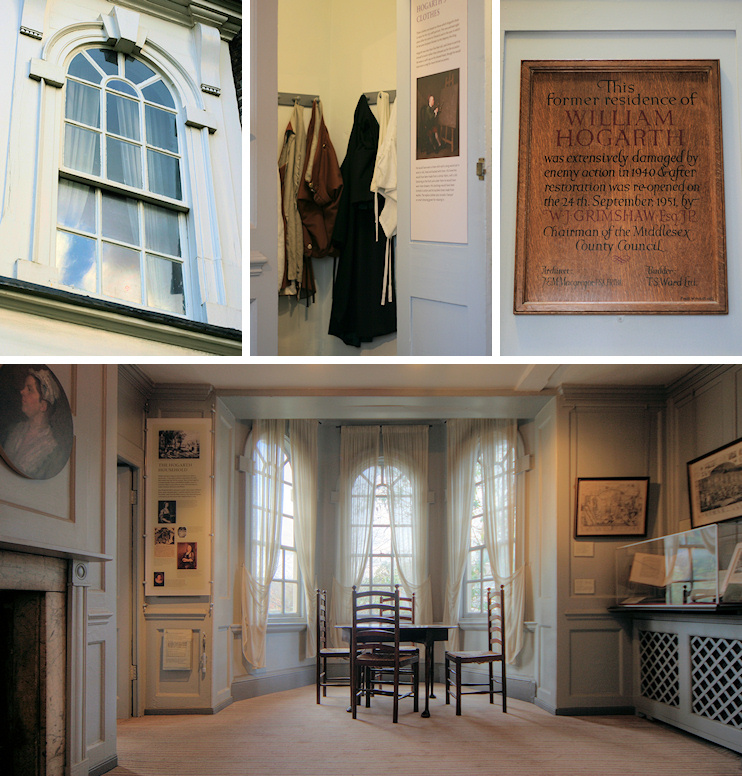 Hogarth’s House, Hogarth Lane, Great West Road, London W4 2QN
Phone: 020 8994 6757
Web page: Hogarth’s House at Hounslow.info
Open: Tuesday to Sunday noon–5pm; closed Mondays except Bank Holiday Mondays; closed on other public holidays
Admission: Free
Facilities: A few souvenir items are on sale in the reception area (the former kitchen) but their prices are less than bargainous. However, given that admission is free, one shouldn’t grumble about being asked to fork out a tenner for a tea towel – even though other attractions sell similar linenware for £3.50. (In fact, I did grumble about it, but I feel bad about that now.)
Nearest station: Turnham Green (Piccadilly line (but not at times when Hogarth’s House is open) and District line)