Honoured as a royal borough in 2012, Greenwich draws hundreds of thousands of visitors every year to expe­ri­ence the delights of the National Maritime Museum, the Royal Obser­va­tory, the Cutty Sark, the 02 Arena and the shops, market stalls, pubs and restau­rants. Yet one attrac­tion is often over­looked, despite its extra­or­di­nary splendour (and the free admission).

The heart of Britain’s naval and astro­nom­ical heritage, Greenwich lies on the south shore of the Thames, opposite the Isle of Dogs. In 1427 Humphrey, Duke of Gloucester, built Bella Court here as his riverside residence. After the duke’s death Margaret of Anjou, wife of Henry VI, enlarged the house and renamed it Placentia, or ‘pleasant place’.

Henry VII made the new palace even grander and it became a favourite royal resort. The future Henry VIII was born here in 1491 and he made further elaborate improve­ments to Placentia. Elizabeth I was also born at Greenwich and spent much time at the palace.

What is now the Old Royal Naval College was orig­i­nally intended as a new palace for Charles II, to replace Placentia. Instead, it was rede­vel­oped as a naval hospital (as it was called, but in fact more of a resi­den­tial care home for wounded or infirm sailors) by Christo­pher Wren and his succes­sors over a period of fifty years from 1695.

The centre­piece of the hospital was the dining hall and in 1708 James Thornhill was appointed to decorate its walls and ceiling with suitably maritime (and impe­ri­al­istic) imagery. Then in his early thirties and yet to gain a repu­ta­tion as an artist of note, Thornhill was so keen to take this commis­sion that he made no attempt to negotiate the price of his labour, simply asking the author­i­ties to pay him a reason­able fee when he’d finished the job.

He hugely under­es­ti­mated the scale of the task and it took him almost 20 years to complete it. It is said that his posture was never the same after­wards, as he had spent so much time flat on his back, with one arm raised. Fortu­nately, the magnif­i­cence of his achieve­ment gained due recog­ni­tion and Thornhill was knighted and paid almost £7000, based on a rate of £1 per square yard for the walls and £3 per square yard for the ceilings. 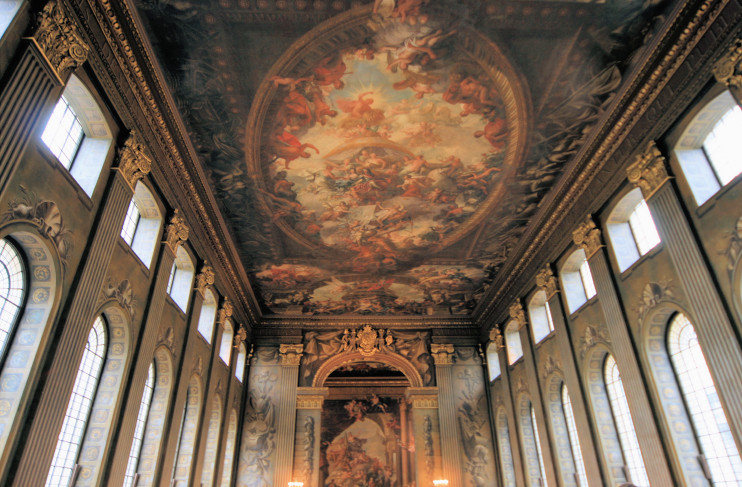 Thorn­hill’s baroque artwork adorns the Vestibule, the Lower Hall and the (smaller) Upper Hall. The two halls are separated by an arch with the Royal Arms and gilded signs of the zodiac, designed by Nicholas Hawksmoor. The focal theme of the Lower Hall ceiling is the triumph of Peace and Liberty over Tyranny, with William and Mary presiding in the central oval. All around, a host of mytho­log­ical and alle­gor­ical char­ac­ters are depicted – both good (triumphing, or attending upon British royalty) and evil (being destroyed or trampled upon). The figures are accom­pa­nied a vast array of nautical and military para­pher­nalia, including anchors, cables, rudders, masts, sails, oars, ensigns, pennants, powder-barrels, grappling irons and compasses, to name but a very few, as well as more classical ornamentation.

When the Painted Hall was finally ready for use, in 1727, it was deemed too grand for everyday eating and the Greenwich pensioners began to take their meals in the under­crofts below. Instead, the public were admitted to the ornate but empty hall for a fee of 6d. The body of Admiral Nelson lay in state here for three days in January 1806 and 30,000 people paid their respects. In 1824 more than 100 paintings were hung on the walls and the hall served as the National Gallery of Naval Art until 1936, when the pictures were moved to the newly founded National Maritime Museum. There­after the Painted Hall was used as a naval dining room until 1998.

Since the departure of the Navy the Painted Hall has been managed by the Greenwich Foun­da­tion for the benefit of the nation and is open daily to the public. It can be hired for banquets with up to 480 guests, and it is difficult to conceive of a more awe-inspiring place for such an event.