Strand on the Green, Hounslow 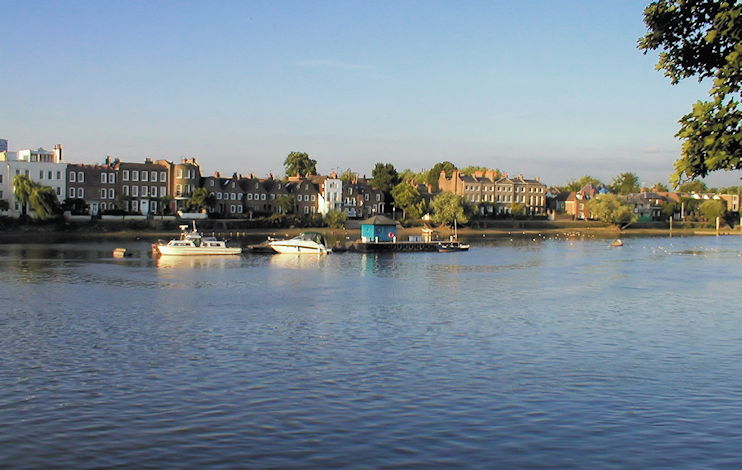 The hamlet was simply ‘Strand’ from the 13th century to the 17th century, from the Old English word for a bank or shore. This was a fishing community with a ferry service to Kew, and one of the medieval settle­ments that comprised Chiswick. In its early days there was no path along the riverbank, just a series of inter­con­necting wharves.

During the 18th century the village attracted wealthy residents who built some grand homes here; and the Ship, Bull’s Head, Bell and Crown (shown in the photo below) and City Barge public houses all came into existence. 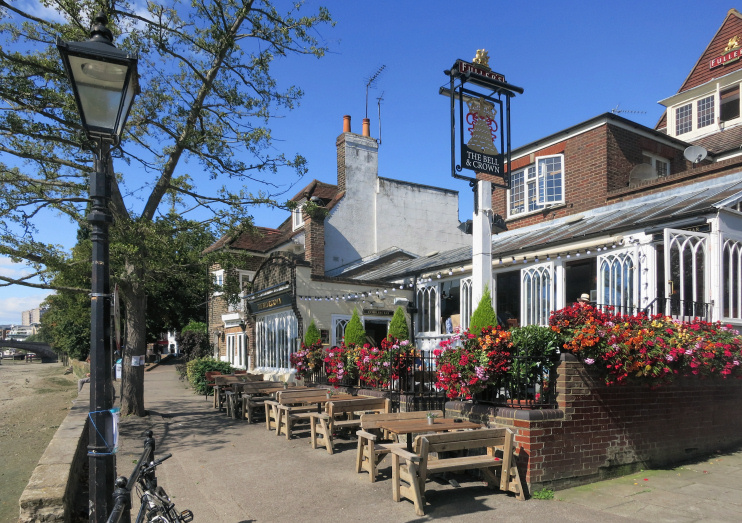 The opening of the first Kew Bridge in 1759 improved acces­si­bility, increased land values and drew some of George III’s courtiers when the king was living at Kew Palace.

The German-born painter Johann Zoffany lived at 65 Strand on the Green from 1790 until his death in 1810. Zoffany sometimes used local fishermen as his models, for example as Christ’s disciples.

By 1800 a contin­uous footpath ran along the bank, although it was liable to flooding at high tide. Orchards and market gardens lay behind the water­front prop­er­ties but by the end of the 19th century these were succumbing to building devel­op­ment, and fishing was dying out as the prime liveli­hood of local families. An increasing number of alleyways provided links to the waterfront.

Chiswick council erected the borough’s first municipal housing in Strand on the Green in 1903 and the whole locality was built up by the 1930s. Some bomb-damaged prop­er­ties were replaced after the Second World War and older cottages were renovated. Until the 1970s Strand on the Green retained some indus­trial premises, which were replaced by resi­den­tial prop­er­ties as they succes­sively closed.

The author Margaret Kennedy lived for a while at Strand Green House and made it the setting for her 1924 bestseller The Constant Nymph. Other village residents have included press baron Hugh Cudlipp, poet Dylan Thomas, writer Nancy Mitford and actor Donald Pleasance.

* The picture of the Bell & Crown on this page is adapted from an original photograph, copyright Des Blenkinsopp, at Geograph Britain and Ireland, made available under the Attribution-ShareAlike 2.0 Generic Licence. Any subsequent reuse is freely permitted under the terms of that licence.