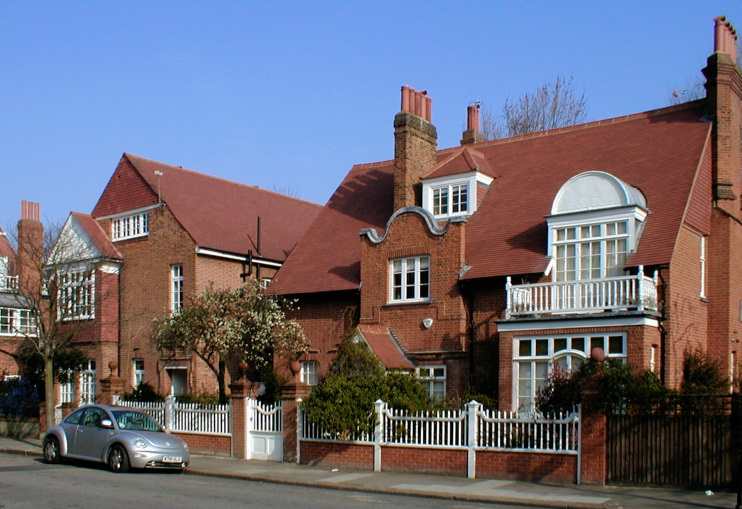 The name comes from Bedford House, a Georgian villa in the grounds of which Bedford Park was laid out. The house itself was named after the man who built it, in the 1790s, ‘John Bedford’ (an assumed name – he was orig­i­nally John Tubbs).

Prompted by the arrival of the Metro­pol­itan Railway at Turnham Green, Jonathan Carr bought 24 acres of land with the intention of building a settle­ment that would be afford­able yet stylish and he commis­sioned EW Godwin to design the first houses. However, the archi­tec­tural press crit­i­cised the interiors, though Godwin had previ­ously worked on the Chelsea homes of Wilde and Whistler. Anxious to avoid damage to the development’s repu­ta­tion, Carr sacked Godwin and brought in R Norman Shaw, the leading architect of his day. Shaw’s Queen Anne archi­tec­ture has been nicknamed ‘Wrenais­sance’ – long rows of houses, some with balconies, differ­en­ti­ated by detailing in the gables, windows and tall chimneys. There was hot water plumbing, and the airy rooms looked out onto tree-lined avenues.

These well-received homes formed the heart of Bedford Park but Shaw resigned in 1880, frus­trated with Carr’s exacting demands and slow bill paying. The next five years’ building was the work of EJ May, a pupil of Shaw’s, and the differ­ences in the designs represent an evolution rather than a change of direction. Carr commis­sioned progres­sively larger houses with more generous gardens, but his company failed in 1886. The remaining plots were sold to an assort­ment of devel­opers and construc­tion continued until the outbreak of the First World War. Unlike many of the more austere Victorian commu­ni­ties, Bedford Park had an inn, a club and an art school as well as the customary church.

The area suffered a decline during the post-war years, and delays in granting statutory protec­tion allowed several houses to be demol­ished and replaced by blocks of flats in the early 1960s. Preser­va­tion groups subse­quently prevented any further destruc­tion and Bedford Park has since regained and even exceeded its original popu­larity – but inevitably with a more main­stream ambience.

WB Yeats lived in Bedford Park for most of the 1880s and 90s, and wrote ‘The Lake Isle of Innisfree’ at 3 Blenheim Road.

Bryan Appleyard’s novel Bedford Park (2013) is a witty historical thriller set in the suburb and elsewhere in Edwardian London.