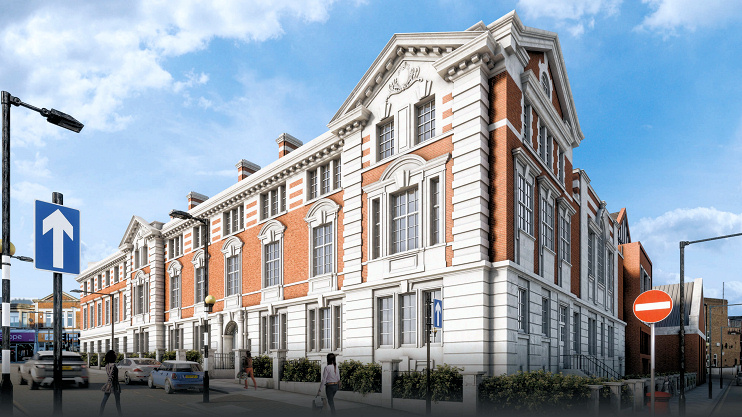 This page is intended to provide a brief intro­duc­tion to Acton, with in-text links to more detailed pages on each of its quarters.

First recorded in 1181, Acton’s name trans­lates roughly as ‘oak farm’. Acton is one of the few places in London with evidence of Stone Age worship. A Bronze Age cemetery has also been located and relics have been found indi­cating two phases of Roman activity.

The area surrounding the village of Acton remained arable farmland until the latter half of the 19th century, when the ‘new model suburb’ of Bedford Park was created to the south-east. East Acton owes its early devel­op­ment to the Worshipful Company of Gold­smiths, whose almshouses have recently been renamed the Gold­smiths Buildings and marketed on a commer­cial basis. Elsewhere, subur­ban­i­sa­tion was well advanced by the outbreak of the First World War.

South Acton was (and to some degree still is) the poorest and most over­crowded part of the district. It was once famous for its laundries and gained the nickname ‘Soapsuds Island’.

Between the wars, Acton became a ‘suburb of produc­tion’, primarily in the vicinity of North Acton and Park Royal. In the 1930s this was Britain’s largest indus­trial area south of Coventry.

The incon­sis­tent evolution of Acton’s land use has resulted in a variety of housing styles, from Victorian villas, through cottage estates to council tower blocks. The roads nearest Chiswick and Ealing (that is, in the south-east and west) are consid­ered partic­u­larly desirable and West Acton is espe­cially popular with the Japanese community because of the Japanese school there. Many of the larger prop­er­ties have been subdi­vided into flats, often rented by young professionals.

New homes are being created in Acton wherever oppor­tu­ni­ties permit, from the trans­for­ma­tion of the post-war South Acton estate into Acton Gardens through the creation of a ‘student village’ in North Acton to the conver­sion of the old town hall into an apartment block, as shown in the developer’s CGI at the top of the page.

Adam Faith, the pop superstar turned actor, grew up on a council estate in Acton Vale.