A commercial zone with a newly added high-rise residential quarter, divided from the rest of Acton by the Western Avenue 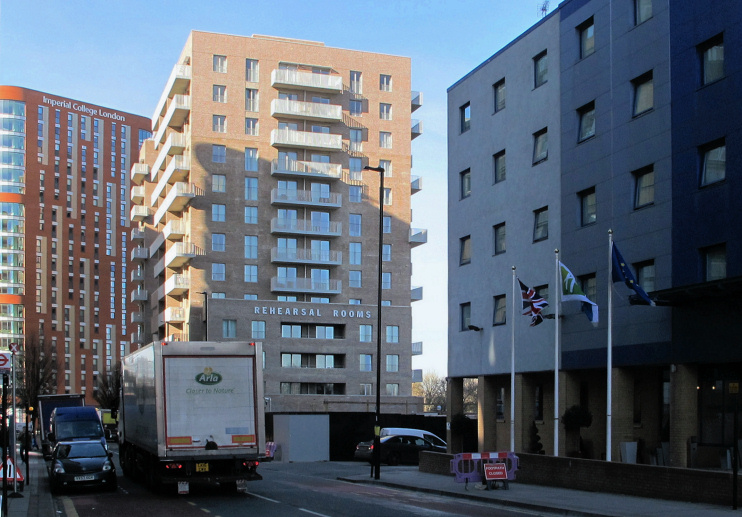 From Eliz­a­bethan times the suppos­edly health-giving Acton Wells spa flour­ished on the eastern edge of the area, near Old Oak Common. Wells House Road marks the site of the former assembly rooms, which later served as a school and then a farmhouse. Horse races were run at Acton Wells in the second half of the 18th century.

Acton cemetery opened in 1895 on Park Royal Road. A bridge across the railway line unites the cemetery’s two halves, which have no remaining space for new graves although existing family plots continue to be used.

The Central line tube station opened in 1923, replacing an earlier Great Western railway service. In the 1930s North Acton formed part of the indus­trial sprawl that made Acton the largest manu­fac­turing town in south-east England between the wars.

The capacious Castle public house was built c.1938 to serve the indus­trial area and should in theory face a secure future as a conse­quence of the devel­op­ments mentioned below – but there’s always a chance it might be knocked down and replaced by yet more flats.

The John Compton Organ Works was among North Acton’s best-known employers, building organs for churches, theatres and cinemas, including some magnif­i­cent Wurlitzer-style instru­ments. Bomb damage in the Blitz and post-war relo­ca­tion caused progres­sive decline in the area from 1940.

Today, North Acton is generally consid­ered part of the Park Royal area. Much of its industry consists of small-scale oper­a­tions, often in ware­housing and distri­b­u­tion. Some disused larger premises, such as the old Elizabeth Arden factory, have been converted to offices, workshops and studios for small busi­nesses with the support of the Park Royal Part­ner­ship. A number of units have lain empty for some time and the ultimate aim is to create a high-density, mixed-use zone that includes media-related enter­prises and some resi­den­tial units and local amenities.

Since 2014 a forest of new builds has sprung up in the vicinity of North Acton station, including several student halls. More continue to appear, each seemingly taller than the last. Among the more notable blocks are two named after former BBC TV facil­i­ties here – the Rehearsal Rooms (built exclu­sively to rent) and the Costume Store (a Univer­sity of the Arts London student hall).

The rela­tively low cost of the sites is the prime reason for the nature of the accom­mo­da­tion here, leading some to fear that an ‘afford­able ghetto’ is being created in this out-of-the-way spot. Still, it makes a change from the thousand-pound-a-week apart­ments on offer in London’s more desirable locations.

The junction of the A40 and Horn Lane in North Acton is known as ‘Gypsy Corner’ in recognition of its former use as a stopping place for Irish Traveller groups passing in and out of London.

* The photo of the Rehearsal Rooms on this page is adapted from an original photograph, copyright David Hawgood, at Geograph Britain and Ireland, made available under the Attribution-ShareAlike 2.0 Generic Licence. Any subsequent reuse is hereby freely permitted under the terms of that licence.