The south-western part of the Chiswick peninsula, consisting of a popular residential zone and extensive sports grounds 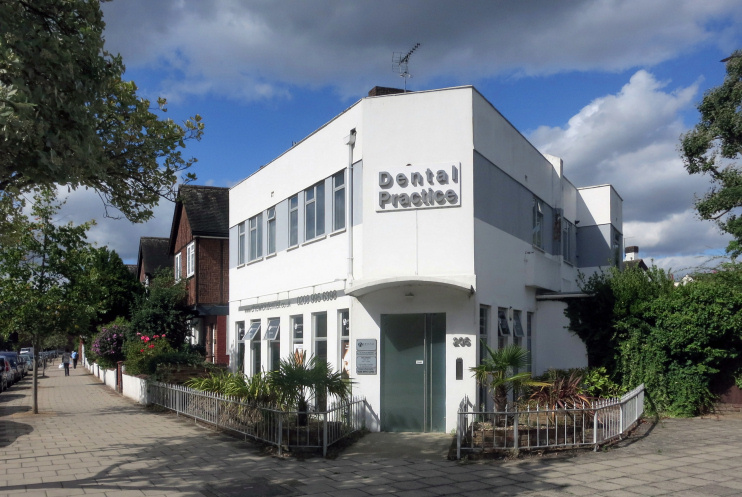 The first Grove House stood here from at least 1412. The Duke of Devon­shire bought the estate in 1833 and remod­elled the house. After the opening of Chiswick station in 1849 the duke began to plan a settle­ment at Grove Park but this was slow to get under way. Grove Park Hotel was built in 1867, followed by the first few houses and then St Paul’s church in 1872.

The popu­larity of Bedford Park prompted two attempts at building a garden suburb here. Thomas Kemp Welch adver­tised a devel­op­ment called Chiswick Park and Jonathan Carr, Bedford Park’s creator, planned a new town called Burling­wick, which would have covered 330 acres and housed 40,000 people. Nothing so grand ever even­tu­ated and Grove Park continued to grow with a series of smaller projects, such as the Riverview estate of 1904.

Soap-makers Dan and Charles Mason began to produce Cherry Blossom boot polish at their factory in Burlington Lane in 1906. The company acquired land on Duke’s Meadows in the 1920s for a packaging plant and an employees’ sport ground. The rest of the meadows were preserved by the council after schemes for a gasworks and a power station were dropped.

The Kinnaird Park estate replaced Grove House following its demo­li­tion in 1928. There seems to be some truth in stories that the house’s building materials were exported to the United States but they were not all reassem­bled in one place. In Staveley Gardens the Chiswick Polish Company built semi-detached houses for its workers in 1930 and maisonettes for retired employees in 1960. Cherry trees were planted to line the walks.

Chiswick Quay is an estate of mid-1970s town­houses built around a marina that was once Grove House’s orna­mental lake and later a yacht and houseboat basin. Many of the large homes of the original Grove Park estate have been demol­ished and replaced by flats or smaller houses but a few early villas survive, notably on Grove Park Road. The built-up stretch of the river­front has seen several new devel­op­ments in recent years, mostly of modest propor­tions, including the conver­sion of the former RAF Asso­ci­a­tion offices into flats.

Duke’s Meadows, to the south of Grove Park, are awash with sports facil­i­ties – for tennis, athletics, cricket and more – as well as with bases for rowing and sailing on the Thames.

* The picture of the triangular dental practice on this page is adapted from an original photograph, copyright Des Blenkinsopp, at Geograph Britain and Ireland, made available under the Attribution-ShareAlike 2.0 Generic Licence. Any subsequent reuse is hereby freely permitted under the terms of that licence.