The Nellie Dean is a public house at 89 Dean Street, on the corner of Carlisle Street. There has been a pub on this corner since at least 1748, when it was called the High­lander. (Some say there was a pub here before that, called the Dolphin, but this author has yet to see reliable evidence to support that claim.)

The pub was rebuilt in its present form in 1900, retaining the High­lander name. In the 1950s and 60s it was a favoured haunt of the bohemian crowd who also patro­n­ised the French House, as well as those working in the movie industry that used to be focused on Wardour Street.

In 1967 the pub became the Nellie Dean, a name inspired by the street on which it stands and honouring Gertrude Astbury, an early 20th-century music hall singer whose signature song was ‘Nellie Dean’, later the title of a musical in which she starred.

Astbury came from Longport, now part of Stoke-on-Trent, and was nicknamed the Stafford­shire Cinderella. She took the stage name Gertie Gitana on account of her supposed Gypsy origins and ‘Gitana’ was adopted to mean ‘banana’ in cockney rhyming slang. When Gertie’s fame faded, the 60s pop singer Wayne Fontana briefly took her place in the cockney fruiterer’s lexicon. 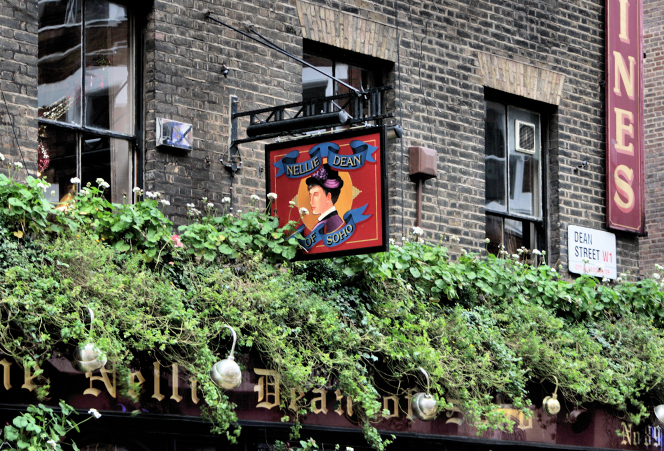