The neglected king of King’s Square

The Guide depicts two works by the 17th-century Danish sculptor Caius Gabriel Cibber. One is the piece entitled Raving Madness, which is on display at Bethlem Royal Hospital Museum alongside its coun­ter­part Melan­choly. The other is this statue of Charles II, which stands, looking weath­er­beaten and grimly forlorn, in Soho Square Garden.

The son of the cabinet maker to the king of Denmark, Cibber studied carving in Rome (where he adopted a Latinate version of his birth name), came to London around 1660 and estab­lished his own studio following a seven-year appren­tice­ship in Long Acre. His clas­si­cally influ­enced style made him a favourite for official commis­sions and one of his last works, which he completed a year before his death in 1700, was the recently restored phoenix on the south pediment of St Paul’s Cathedral.

Many of Cibber’s works have not survived – or at least not survived well – because he was often asked to produce outdoor sculp­tures yet he usually chose to work in Portland stone, which is easily and quickly carved but even­tu­ally succumbs to dete­ri­o­ra­tion in the open air.

Amid Soho Square’s plentiful trees and flower beds, an eyecatching mock-Tudor folly and the crowds of bench-filling break-takers (who spill abun­dantly onto the lawns in summer), it’s easy to overlook Cibber’s time-worn royal statue. Yet it formed the centre­piece when the garden was first laid out in the early 1680s, when Charles was still on the throne. At that time it stood atop a high pedestal in the basin of a fountain, and the square was called King’s (or King) Square after the statue. The fountain was orig­i­nally surrounded by a group of statues that included the ‘gods’ of the Severn, Thames, Tyne and Humber.

By the beginning of the 19th century the fountain was no longer func­tioning, its basin had probably been filled in and the royal statue was already looking much the worse for wear and vandalism. Never­the­less, Charles remained in his focal position until 1875, when a horti­cul­tural restora­tion project forced him to make way for the present glorified gardeners’ shed, designed in the style of an octagonal market cross building, and now grade II listed.

The food magnate Thomas Blackwell (of Crosse & Blackwell fame) bought the unwanted fountain as a gift to Frederick Goodall, his neighbour in Harrow Weald (now part of north-west London). The wealthy artist installed it on an island in a stretch of orna­mental water in the lush gardens of his newly built home, Grim’s Dyke (which is now a hotel). There it remained until February 1938, when Charles’s statue was restored to Soho Square according to the bequest of Lady Gilbert, widow of the libret­tist WS Gilbert, who had bought Grim’s Dyke in 1890. It now stands just to the north of its original position, in the middle of the path. 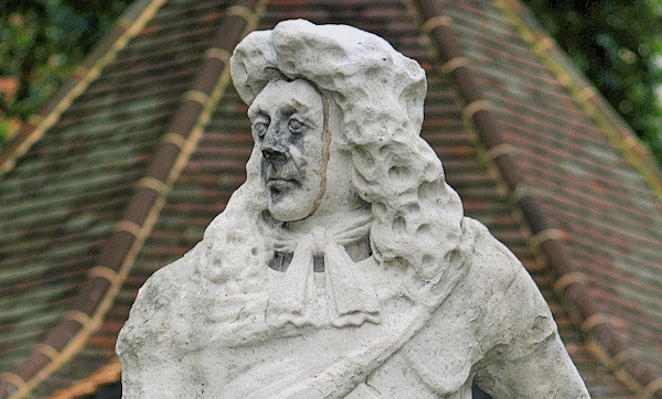