The art and artefacts of ‘Bedlam’

Bethlem Museum of the Mind, Beckenham

Most Londoners will be aware of the insti­tu­tion that was the origin of the word ‘bedlam’ but few know that it has survived to the present day, albeit in a very different form and setting.

The priory of St Mary of Bethlehem was founded outside Bish­ops­gate in 1247 and 130 years later it began to provide shelter and care for the mentally ill. When Henry VIII dissolved England’s religious orders and confis­cated their prop­er­ties he gave the priory buildings to the City as a place of incar­cer­a­tion (but very little treatment) for London’s lunatics.

In 1675 a new hospital was built in Moor­fields, where it gained notoriety through its policy of allowing those who could afford an admission fee to amuse them­selves by wandering the halls and, quite literally, mocking the afflicted.

The insti­tu­tion put its unsavoury past behind it and relocated to Lambeth in 1815, to the building that now houses the Imperial War Museum, and in 1930 it moved to its present site in the leafy suburb of Monks Orchard, which lies on the south side of Beckenham.

Since 2015 the hospital’s museum and gallery have shared the easy-to-find admin­is­tra­tion block at the end of the short entrance drive.

The museum possesses a magnif­i­cent collec­tion of material relating to mental illness and the history of the Hospital of St Mary Bethlehem and its succes­sors. However, only a limited selection can be displayed at any one time. Its most prized posses­sions are the statues Melan­choly and Raving Madness (shown below), by Caius Gabriel Cibber (see also the statue of Charles II), which were orig­i­nally mounted on either side of the gateway to the Moor­fields hopsital.

The gallery contains a little miscel­lany of art, mostly the work of the hospital’s residents and ex-residents. Exhi­bi­tions and events are programmed throughout the year. The paintings and drawings on display range from the whimsical to the discon­certing and sometimes downright distressing. On a lighter note, there are Bedlam-branded souvenir items for sale – mugs, pencils and the like. 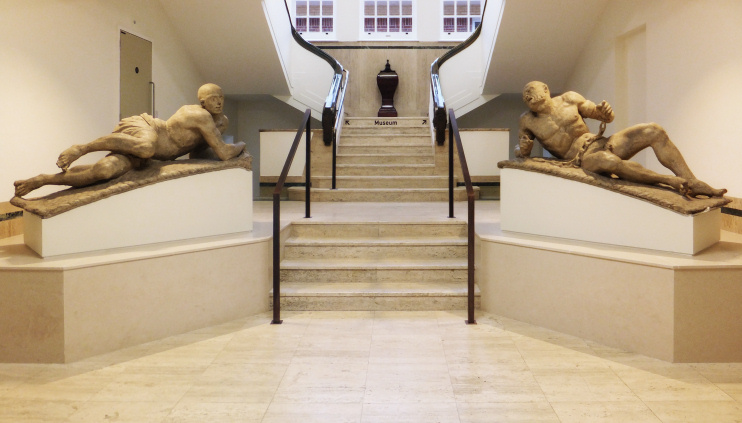 The Bethlem Royal Hospital, Monks Orchard Road, Beckenham BR3 3BX
Phone: 020 ​3228 4227
Websites: Bethlem Museum of the Mind, Bethlem Gallery
Open: Wednesday–Friday 10am–5pm and on the first and last Saturday of each month (also open on Mondays and Tuesday to pre-booked groups only)
Closed: bank holidays and other (NHS) statutory holidays
Admission free
Nearest stations: Eden Park and West Wickham (both National Rail and two-thirds of a mile from the hospital)

The picture of Bethlem Museum of the Mind on this page is adapted from an original photograph, copyright Adrian Brown, at Flickr, made available under the Attribution-NonCommercial 2.0 Generic licence. Any subsequent reuse is freely permitted under the terms of that licence.