Denmark Street was laid out in 1687 and named in honour of Prince George of Denmark, who had married Queen Anne four years earlier. Eight of the street’s original prop­er­ties survive today – and two of these were upgraded from grade II to grade II* listing in 2016.

The street is situated in the area once known as St Giles’s, which was long a centre for the printing and distri­b­u­tion of ballad sheets, also known as broad­sides, which were then sold far and wide by itinerant hawkers.

The 20th-century successor to the broadside trade was the publi­ca­tion of sheet music and the first such publisher to set up shop in Denmark Street was Lawrence Wright (who also composed under the name Horatio Nicholls), in 1911. He began in the basement of number 8 and after the First World War moved to 19 Denmark Street – which he named Wright House. Wright founded the Melody Maker magazine here in 1926, mainly as a vehicle to promote his own songs.

Soon after­wards the publishers Campbell Connelly moved from Tottenham Court Road to Denmark Street and it began to gain a repu­ta­tion as London’s Tin Pan Alley, a nickname borrowed from the area around New York’s West 28th Street.

By the 1940s most of London’s music publishers were located here and business thrived. This geograph­ical concen­tra­tion had a sound economic rationale. Profes­sional singers (who in those days rarely wrote their own material) would regularly make the rounds of all the publishers, listening to their latest songs and choosing which they wanted to perform, so it made sense for the rivals to be located in close proximity to each other.

The New Musical Express, which became the Melody Maker’s great rival and ulti­mately absorbed it, was launched at 5 Denmark Street in 1952. Two years later, Ralph Elman, a session violinist, opened a recording studio in the street. Regent Sound followed in 1962 and soon almost every square foot of Denmark Street was devoted to rock and pop music, with publishers in upstairs offices (no longer requiring shop windows to display their wares), instru­ment and equipment retailers at street level, repairers in rear workshops and recording studios in basements.

Just open your ears and follow your nose
’Cos the street is shakin’ from the tapping of toes
The Kinks, ‘Denmark Street’ (1970)

Many of London’s greatest musical acts rehearsed or made early record­ings in Denmark Street, including the Kinks, the Rolling Stones, the Small Faces, David Bowie (who even lived on the street in a camper van for a while) and the Sex Pistols. From further afield, Paul Simon, Jimi Hendrix, Stevie Wonder and Bob Marley also recorded here. The Giaconda Café, which was at number 9, was the musicians’ favourite haunt. Eric Clapton, Jeff Beck and Pete Townshend bought guitars at Rhodes Music.

Although it’s not what it once was, Denmark Street is still London’s prime location for the sale and repair of musical instru­ments, but what remains of its unique character has been further eroded by the regen­er­a­tion scheme accom­pa­nying the arrival of the Elizabeth line (Crossrail) at Tottenham Court Road station. The devel­opers stated that no buildings would be demol­ished on Denmark Street itself, that existing retailers would be retained and that construc­tion work would be phased so that they could stay open and keep trading throughout the process. However, some busi­nesses have since closed or moved elsewhere – though most still appear to be thriving. 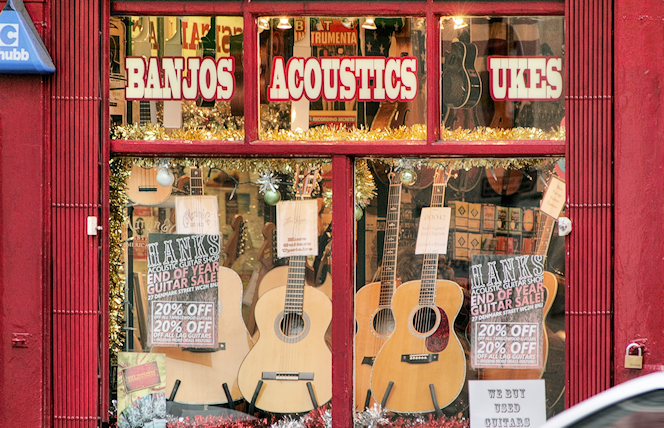