A commercial thoroughfare running along the western edge of Bloomsbury, noted for its furniture and electronics retailers 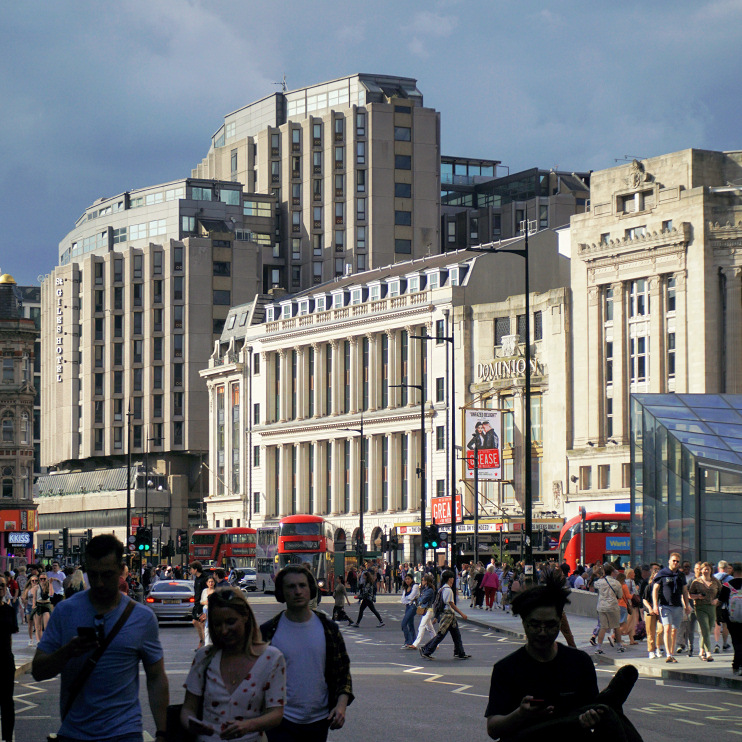 The Eliz­a­bethan manor house of Totten­hall stood on the site now occupied by the UCLH admin­is­tra­tive building at 250 Euston Road – the one that’s faced with so much reflec­tive glass it almost disap­pears into the surrounding sky. Exca­va­tions here have uncovered early Saxon pottery, a series of 13th- to 14th-century yard surfaces and the remains of medieval and Tudor walls.

By the time of the manor house’s demo­li­tion in the early 18th century, its name had become corrupted to Tottenham Court and the lane that ran here from St Giles was called Tottenham Court Road. The mutation from ‘Totten­hall’ to ‘Tottenham’ was prompted by public famil­iarity with the north London district of that name, although the manor had no connec­tion with that place.

From the late 18th century and espe­cially in the 19th century, Tottenham Court Road was known for the manu­fac­ture of furniture, espe­cially cabinets. Some of the workshops later turned to piano-making.

Built in 1896 in Art Nouveau Gothic style, the surviving archi­tec­tural highlight of the west side is the Rising Sun public house, at number 46. Tottenham Court Road’s Central line station opened in 1900 and the Northern line stations along its length all opened in 1907.

Furniture retailing grew in tandem with the manu­fac­turing industry and several grand emporia were erected on the street in the 1910s and 1920s. The finest of these was (and still is) Heal’s, which had already been on Tottenham Court Road for almost a century before its store was enlarged and endowed with a Portland stone façade in 1912–17 (and later extended south­wards). Pevsner calls it “the best commer­cial front of its date in London.” 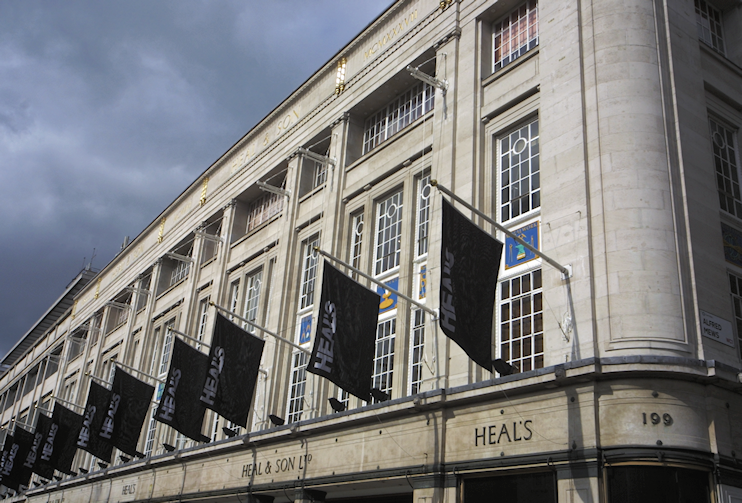 Visible in the photo at the top of this article, the Dominion Theatre was built at the southern end of Tottenham Court Road in the late 1920s, backing onto the site of Meux’s brewery – once the source of the London Beer Flood. The Dominion served as a cinema for most of its first 40 years and nowadays devotes itself almost exclu­sively to musical theatre.

Beneath Tottenham Court Road’s junction with Chenies Street lies the bunker from which General Eisen­hower directed the Allied forces’ liber­a­tion of Western Europe. It is now used for the secure storage of documents and data.

With its prepon­der­ance of bank branches and sandwich purveyors, Tottenham Court Road’s mix of busi­nesses increas­ingly resembles that of any other central London high street, but north of Goodge Street there’s still a bias towards furniture retailing, while further south there are special­ists in audio­vi­sual, photo­graphic and computer equipment.

Making a diagonal link with Oxford Street at the southern end of Tottenham Court Road is hidden-away Hanway Street, a conser­va­tion area with some recherché shops and bars, including a couple with Spanish connec­tions – a reminder that Tottenham Court Road once had a repu­ta­tion as London’s Latin quarter.

The arrival of the Elizabeth line at Tottenham Court Road, which even­tu­ally happened in May 2022, is expected to result in a 40 per cent increase in passenger traffic through the hugely enlarged station, making it busier than Heathrow airport. Accord­ingly, Camden council has carried out a phased programme of improve­ments to the neigh­bouring public realm – and from spring 2021 sections of Tottenham Court Road were restricted to buses and bicycles during the daytime from Monday to Saturday.

In George Bernard Shaw’s play Pygmalion, Eliza Doolittle sells flowers on the corner of Tottenham Court Road. In Lerner and Loewe’s musical adaptation, My Fair Lady, Eliza lives in a Tottenham Court Road tenement, although she goes home to Drury Lane in the original play.