Like nearby Warren Street, Goodge Street is better known as the name of a tube station than as a thoroughfare in Fitzrovia, where it branches westwards off Tottenham Court Road and soon becomes Mortimer Street 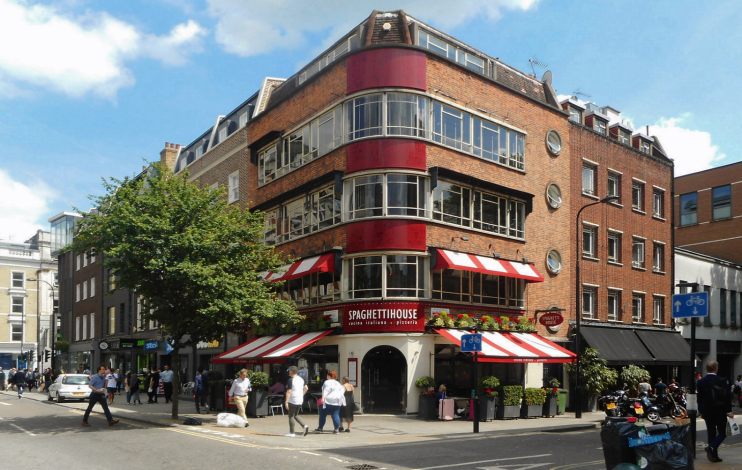 John Goodge obtained Crab Tree Field by marriage in 1718 and his sons Francis and William developed the land from around 1746 onwards.

When the Northern Line station opened in 1907 it was at first named Tottenham Court Road, while the stop to its south was called Oxford Street. Within a year the company changed its mind and gave the two stations their present names.

During the Second World War the govern­ment built a deep shelter linked to Goodge Street station, part of which was made available to General Eisen­hower as his oper­a­tional head­quar­ters for D‑Day. After the war the army used the shelter as a transit centre until it was damaged by fire in 1956.

In the mid-1960s some of Goodge Street’s cafes gained a repu­ta­tion as hang-outs where illicit substances might be obtained. Donovan’s ‘Sunny Goodge Street’ was one of the first pop songs to explic­itly mention drug-taking. Judy Collins, Marianne Faithfull and Paul McCartney later recorded cover versions. For a while, Goodge Street’s name became emblem­atic of the ‘stoned’ hippie lifestyle, even rating a mention on the American cop show Hawaii Five‑O.

On the southern corner of Goodge Street and Tottenham Court Road property developer Dukelease has renovated five existing buildings and an untouched void to create 13 apart­ments and pent­houses, some of which are visible on the left in the photo above. The Artisan devel­op­ment won the top prize at the Evening Stan­dard’s New Homes Awards in 2016.

The surrounding area is now known for its elec­tronics retailers, nearby academic insti­tu­tions and the art galleries of Windmill Street. Scala Street boasts the delightful Pollock’s toy museum.

* The picture of the Spaghetti House, Goodge Street at the top of this page is slightly modified from an original photograph, copyright Des Blenkinsopp, at Geograph Britain and Ireland, made available under the Attribution-ShareAlike 2.0 Generic Licence. Any subsequent reuse is hereby freely permitted under the terms of that licence.