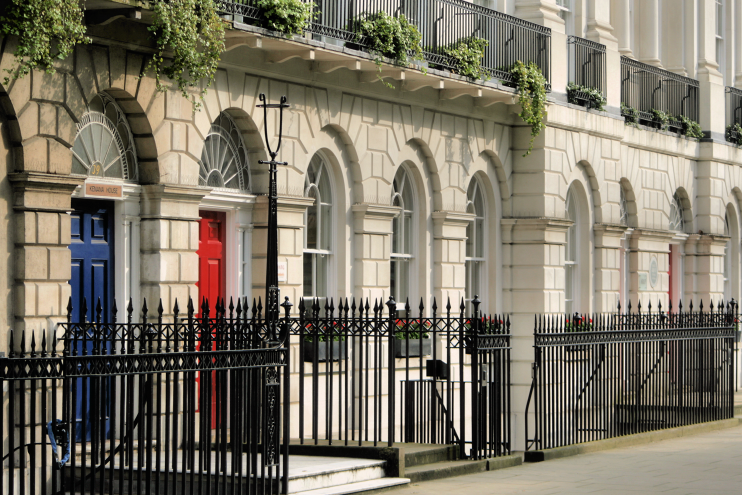 The locality was first developed by Charles Fitzroy, lord of the manor of Totten­hall, from 1757. The east and south sides of Fitzroy Square were designed by Robert Adam in 1794 and survive in their original form, in Portland stone, though with extensive restora­tion of wartime damage on the south side (shown in the photo­graph above).

Fitzroy built for the upper classes, but they soon migrated south-westwards to Belgravia and Mayfair, forcing subdi­vi­sion of the aris­to­cratic houses into workshops, studios and rooms to let.

Immi­grants from France and neigh­bouring countries crowded in and helped establish the district as a centre for the furniture trade by the end of the 18th century. Thomas Chip­pen­dale was among the craftsmen who set up shop here. The artist John Constable main­tained a local residence, although he spent most of his time in Hampstead.

Early in the 20th century Walter Sickert and friends formed the Fitzroy Street Group, based in Whistler’s former home at 8 Fitzroy Street.

In the mid to late 1930s Augustus John and Dylan Thomas bolstered the Bohemian repu­ta­tion of the area north of Oxford Street – which was regarded by many at that time as a northern extension of Soho.

John is widely said to have invented the ‘Fitzrovia’ name, in honour not of Fitzroy Square but of his favourite hostelry, the Fitzroy Tavern. However, in his excellent book London Calling, local resident Barry Miles credits the coinage to the Ceylonese publisher and editor Meary J Tambimuttu, with the same boozy inspiration.

But it’s possible that neither version of this roman­ti­cised story is true. Hidden London believes that the term ‘Fitzrovia’ may have been in use by the late 1920s, based on a reference in a 1930 book review* to “Miss Hamnett’s remi­nis­cences of Mont­par­nasse and that district of London which is sometimes known as Fitzrovia.” Nina Hamnett’s memoirs do not mention the Fitzrovia locality by that name, so this review seems to consti­tute its first ever appear­ance in print. In the late 1920s none of the people usually credited with inventing the name were yet frequenting the locality, except possibly Tom Driberg, and he didn’t use the ‘Fitzrovia’ appel­la­tion in his newspaper column until 1940.

Before the Second World War Fitzrovia had a highly visible German community and Charlotte Street – the principal thor­ough­fare – was nicknamed Char­lot­ten­strasse. Greeks and Italians brought new vitality to the locality after the war, followed later by Nepalese and Bengalis.

A post-war shortage of commer­cial space in central London prompted the rezoning of Fitzrovia as a light indus­trial area and some fine Georgian prop­er­ties – including Consta­ble’s house – were knocked down and replaced by office blocks, many of which have since been rebuilt.

Located at 60 Cleveland Street, the BT Tower was built for the General Post Office and became oper­a­tional on 8 October 1965. The tower is 174 metres tall – 189m to the top of its highest mast – and was the UK’s tallest building from its topping out until 1980.

Today, around 6,500 people live in Fitzrovia, while 50,000 work here. Charlotte Street is a focus for media busi­nesses – and for their favourite bars and bistros.

The latest big projects in Fitzrovia have been the rede­vel­op­ments of the former Royal Mail site between Rathbone Place and Newman Street and the former Saatchi & Saatchi offices in Charlotte Street. Rathbone Square has 162 apart­ments, Face­book’s new UK head­quar­ters and shops, cafés and restau­rants around a new public square. Shown in the devel­opers’ CGI below, 80 Charlotte Street is also a mixed-use scheme with a new public space. The building’s design is said to be a homage to the construc­tivist artists who lived in Fitzrovia in the 1950s and 60s.

George Bernard Shaw lived with his mother at 37 Fitzroy Street in the early 1880s and then in Fitzroy Square from 1887 until his marriage in 1898. The former address was the London base of the writer – and founder of Scientology – L. Ron Hubbard in the 1950s. The house now hosts an exhibition of Hubbard’s life and work, and is open to the public by appointment.