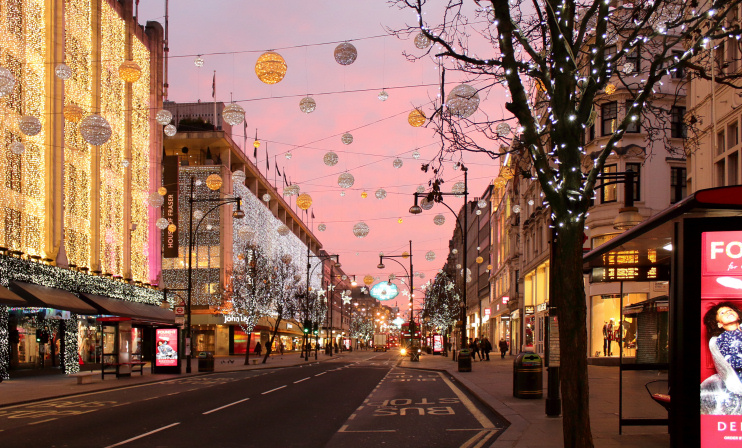 This was a medieval track, part of ‘the way to Uxbridge’, and was formerly known as Tyburn Road. The change to Oxford Street took place gradually between about 1718 and 1729 and the modern name probably derives from former landowners the earls of Oxford.

The neigh­bour­hood’s evolution culmi­nated in the 1810s with the creation of Regent Street, which formed a cross­roads at what is now Oxford Circus but was orig­i­nally named Regent Circus North. There­after, small shops such as book­sellers, shoe­makers and gold­smiths spread outwards from this focal point.

By the 1890s Oxford Circus had become a notorious traffic blackspot, crowded with horse-drawn carriages from dawn until dusk. During this decade the linen draper Peter Robinson relocated here, operating premises at both the north-western and north-eastern corners, while Dickens and Jones took up residence at the south-eastern corner.

The opening of four Central Line stations on the street in 1900 encour­aged customers to travel from further afield and in 1902 the Bourne and Hollingsworth brothers-in-law moved their store to Oxford Street from West­bourne Grove, which had been a rival for shoppers’ attentions.

In 1909 Harry Gordon Selfridge opened Britain’s first ‘demo­c­ratic’ depart­ment store, where you could walk around as you pleased rather than being shown from counter to counter.

Oxford Circus was rebuilt over an eleven-year period from 1912 as part of the recon­struc­tion of Regent Street. Oxford Street became single-mindedly devoted to retailing and the last private houses disap­peared in 1930, to be replaced by a Gamage’s depart­ment store.

Marks and Spencer opened its Marble Arch store in 1930 and the Pantheon store in 1938. By this time, John Lewis’s business had grown to fill a pair of depart­ment stores, but these were destroyed by fire after being hit by an oil bomb in 1940. The John Lewis store was rebuilt in its present form in the late 1950s.

The first display of Christmas lights on Oxford Street was turned on in 1959 and the event is now a heavily publi­cised part of the promo­tional calendar, usually involving celebri­ties who appeal to an audience of parents and children. Oxford Circus gets so clogged with shoppers in the run-up to Christmas that police officers are needed to control the pedes­trian crossings.

Today the street shifts upmarket from east to west, although the vicinity of Tottenham Court Road station has been revi­talised by the arrival of the Elizabeth line. At present, the discount traders are mostly at the eastern end, while depart­ment stores and flagship branches of mass-market fashion groups cluster around Oxford Circus. Towards Marble Arch the mix includes hotels and outlets targeting foreign tourists. Much of the south side of Oxford Street is owned by Grosvenor Estates, which has collab­o­rated with West­min­ster council in making envi­ron­mental improvements. 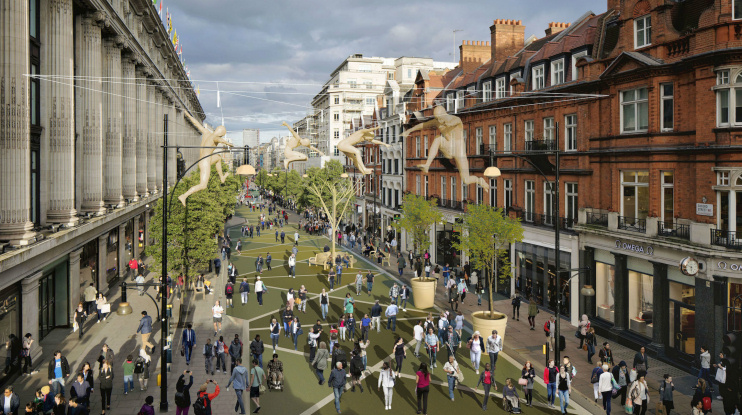 Despite receiving backing from London mayor Sadiq Khan, plans to pedes­tri­anise the street (as shown in the CGI above) were withdrawn by West­min­ster council in June 2018, following public consul­ta­tions. However, council leader Nickie Aiken was reported as saying: “Doing nothing to improve the area is not an option either if we are to maximise the potential benefits from the opening of the Elizabeth line. We must future-proof Oxford Street and the surrounding district so it … maintains its crown as the nation’s high street in an ever-changing business and retail environment.”

Marks and Spencer’s Pantheon store occupies the site of a pharmacy where the writer Thomas de Quincey obtained his first supply of opium. De Quincey addressed the street as a “stonyhearted stepmother, thou that listenest to the sighs of orphans, and drinkest the tears of children.”

* The picture of Oxford Street on Christmas Eve 2016 at the top of this page is adapted from an original photograph at Flickr, copyright Poppybead, made available under the Attribution 2.0 Generic licence. Any subsequent reuse is hereby freely permitted under the terms of that licence.