The administrative and commercial centre of the borough of Hillingdon, situated on the western edge of Greater London, south of the Western Avenue 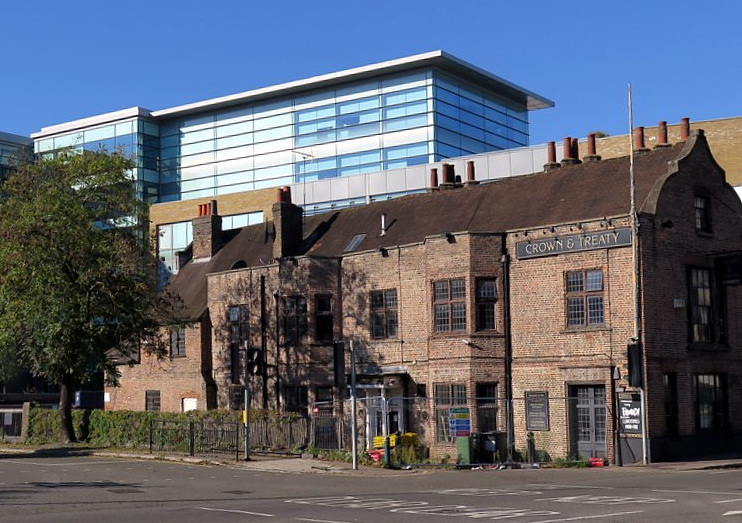 Uxbridge’s name almost certainly derives from the Wixan tribe who settled various parts of Middlesex in the seventh century. Their bridge would have crossed the River Colne. However, no document recorded the existence of the village until the mid-twelfth century, when it was called Wixebrug.

St Margaret’s church began life as a chapel of ease to Hillingdon church in the early 13th century. A market house was built by 1513 and soon after­wards a ribbon of timber-framed houses lined the Oxford road from the Colne to what is now Vine Street.

The Bennet family owned a mansion called The Place, where Royalist and Parlia­men­tary repre­sen­ta­tives drew up an abortive treaty to end the Civil War in 1645. The mansion was later reduced in size and renamed the Treaty House. It is now a pub called the Crown and Treaty.

During the 18th century Uxbridge flour­ished as a coaching halt, with shops and inns on the High Street. The present market house was built in 1788.

The construc­tion of the Grand Junction (now Grand Union) Canal in the 1790s brought industry to Uxbridge Moor and by 1801 passenger barges were running daily to Paddington. The transport links helped confirm Uxbridge’s supremacy over Hillingdon as a market town, partic­u­larly for corn.

Coach traffic continued to increase and the town had 54 licensed premises in 1853. Three years later the first railway station opened and road travel began to wane, with many inns and their stables converting to private dwellings. From the late 19th century, private house­building began to spread towards Cowley and Hillingdon, and subse­quently to the north, encour­aged by the construc­tion in 1904 of the Metro­pol­itan Railway terminus in Belmont Road.

The council built outlying estates after the First World War and in the 1930s demol­ished slum prop­er­ties in the crowded centre. Uxbridge Lido opened in 1935 and has since been restored as part of the Hillingdon sports & leisure complex.

Designed by Charles Holden and Leonard Bucknell, Uxbridge tube station was rebuilt at its present location in 1938. Its most unusual feature is a panel of stained glass windows in the booking hall featuring local civic heraldry. 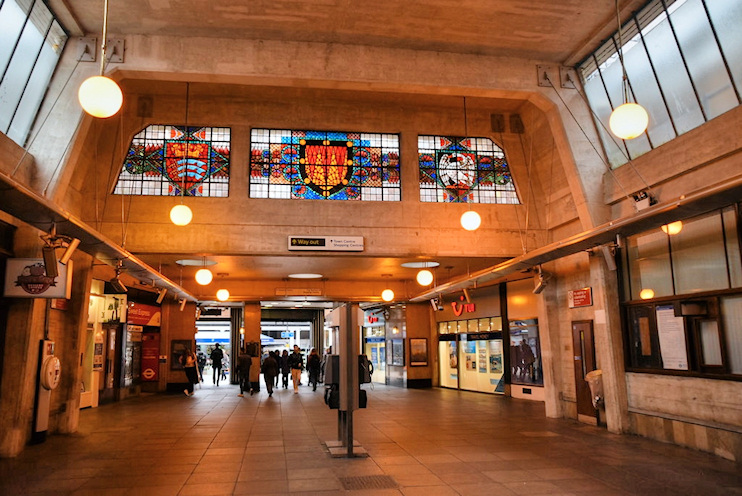 From the late 1960s the council embarked on the wholesale rede­vel­op­ment of the town centre, paving the way for the present appear­ance of the shopping and leisure area. Two shopping malls now dominate the High Street: the Pavilions and the Chimes. Listed buildings in the Old Uxbridge conser­va­tion area have been refurbished.

In 1967 Brunel Univer­sity relocated to a 170-acre plot in south-east Uxbridge that had formerly been the Lowe and Shawyer nursery and market garden. Following the closure of satellite campuses at Runnymede, Twick­enham and Osterley, all the univer­si­ty’s depart­ments are now based here.

Hillingdon civic centre was built south of the station in the mid-1970s in an original and influ­en­tial style that avoided the grandly monu­mental approach taken by most town halls.

Upmarket apartment blocks have recently added a new dimension to Uxbridge’s resi­den­tial profile, espe­cially along the banks of the canal. In 2017 rela­tively tasteful plans to redevelop the former Randalls depart­ment store prompted reactions at Get West London that included “Uxbridge is finished” and “this country has had it”. However, Hillingdon coun­cil­lors were less dismayed by the proposal for around 60 flats and space for shops, retaining the original modernist building, and they approved the scheme unan­i­mously.

Former London mayor Boris Johnson has been member of parliament for the constituency of Uxbridge and South Ruislip since the 2015 general election.

* The picture of the Crown & Treaty, Uxbridge is cropped from an original photograph, copyright Andrew Curtis, and the picture of Uxbridge tube station concourse is adapted from an original photograph, copyright N Chadwick, both at Geograph Britain and Ireland, made available under the Attribution-ShareAlike 2.0 Generic Licence. Any subsequent reuse is freely permitted under the terms of that licence.