Once a parish and metropolitan borough stretching as far as West Kilburn, but now a compact, densely built-up commercial locality surrounding the station that bears its name 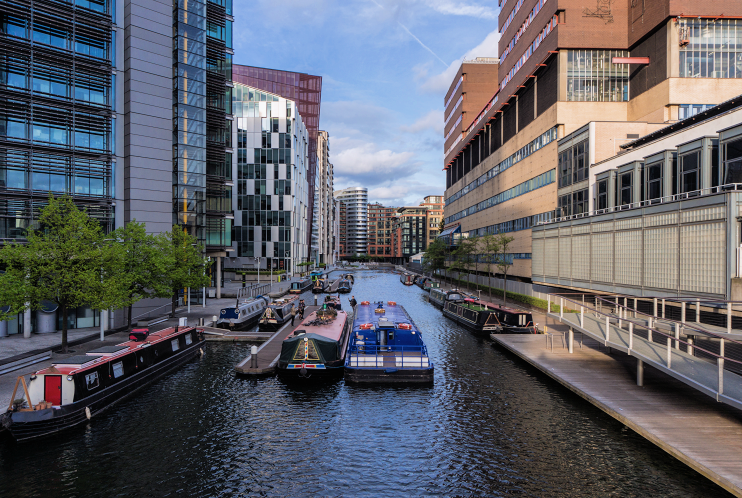 An ‘estate asso­ci­ated with a man called Padda’ was first recorded c.959, when it was spelt ‘Padintune’. A charter suppos­edly drawn up in 998 spelt it ‘Padding­tone’. The London Ency­clopaedia calls Padda “an Anglo-Saxon chieftain who settled strate­gi­cally near the junction of the Edgware and Bayswater Roads.” However, this appears to be educated guesswork at best. No one actually knows whether Padda was a tribal leader or just a small­holder, or where his estate was – though it’s generally believed to have been in the vicinity of what became Paddington Green. And Padda (or maybe Pada) could have lived any time between the 5th century and the 10th – but it was probably nearer the former.

The settle­ment at Paddington Green did not begin to grow until the 16th century, which was rela­tively late for a place so close to London. From 1524 the White Lion pub stood on Edgware Road, opposite what is now the end of Bell Street.

The parish church of St Mary was built in the 17th century and rebuilt in 1791, when the village had become popular as a rural retreat. The landscape gained a predictable smat­tering of gentlemen’s seats in the 18th century but was also much disfig­ured by gravel workings.

From the start of the 19th century the village became the focus of a series of trans­porta­tion initia­tives that hastened its urban devel­op­ment. The Paddington branch of the Grand Junction (now Grand Union) Canal opened in 1801 and the canal company sponsored the construc­tion of Grand Junction Street (now Sussex Gardens) and Praed Street, named after the company’s chairman, William Praed. London’s first horse-drawn bus service began operating from Paddington Green in 1829.

The Great Western Railway arrived in 1838, at first using a temporary terminus building that later became the site of a goods depot. Queen Victoria alighted here in 1842 after her first-ever train journey, which had begun in Slough, Berkshire. A permanent station opened in 1854, designed by the railway’s chief engineer, Isambard Kingdom Brunel.

By this time the surrounding area was densely built up, mostly with working-class terraced housing. The White Lion was rebuilt twice, becoming the Metro­pol­itan Music Hall in the 1860s. The village had become a crowded, semi-indus­trial suburb, and St Mary’s Hospital had been built on Praed Street. The south-eastern part of the parish had meanwhile been built up as fash­ion­able Tyburnia.

Piecemeal rebuilding from the late 19th century to the present day has left central Paddington with a streetscape that ranges from fine Georgian terraced houses to some seedy flats above shops.

The Metro­pol­itan Music Hall was demol­ished in 1962 as a conse­quence of construc­tion work on the Maryle­bone flyover and was replaced by Paddington Green police station. This well-known landmark is the fortress to which suspected terror­ists are usually taken for ques­tioning in London. The IRA exploded a bomb outside the police station in 1992. The flyover and the elevated section of the Westway divided the station and its environs from the settle­ment that had grown up around the green.

A large-scale mixed-use devel­op­ment at Paddington Waterside has recently taken shape in the shadow of the Westway.

The area around the station is the devel­opers’ next target, notably in the form of the Paddington Cube, which is shown in the CGI below and is proposed to replace a former Royal Mail sorting office. The ‘floating’ 14-storey block, designed by Renzo Piano, is intended to be a more accept­able scheme than a previ­ously proposed 72-floor tower dubbed the Paddington Pole. 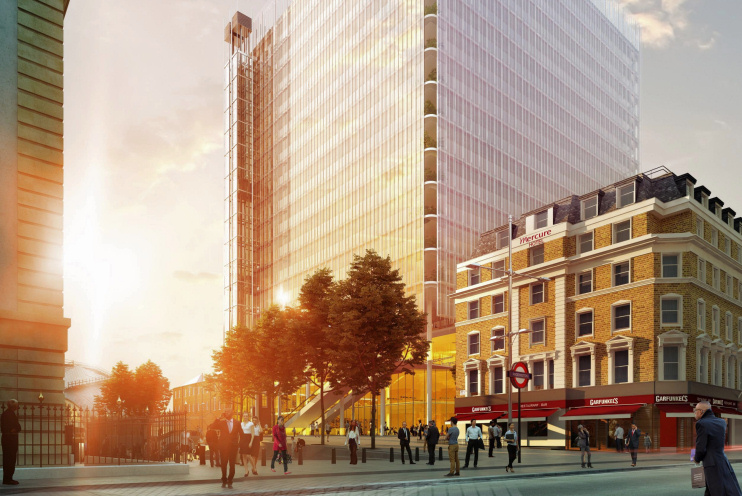 Paddington is perhaps most famous for the children’s book and television character Paddington Bear, who was found at the station and went to live in the suburban Brown household. The bear made his first appearance on the big screen in 2014.

* The picture of Paddington Basin at the top of this page is adapted from an original photograph, copyright Andrew H, at Flickr, made available under the Attribution 2.0 Generic Licence. Any subsequent reuse is hereby freely permitted under the terms of that licence.