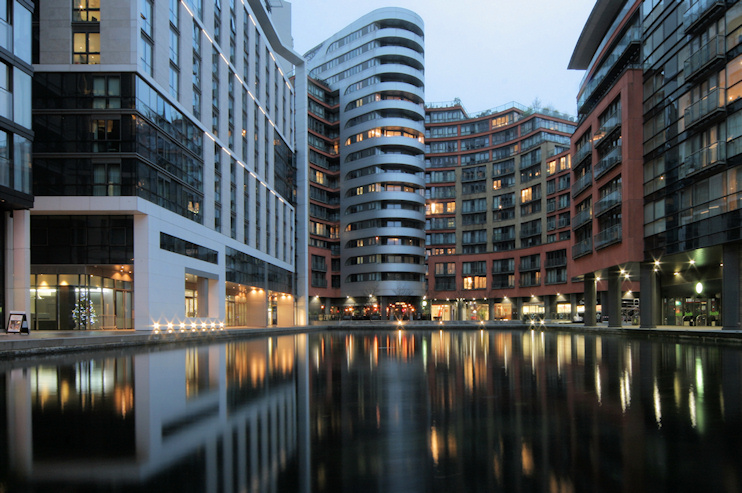 Rivalling the recent trans­for­ma­tion of King’s Cross in scale, if not in cohesive imag­i­na­tion, this is one of the largest schemes – a so-called Oppor­tu­nity Area – that the capital has seen since the regen­er­a­tion of Docklands.

Most of the new building has taken place north of the station but the 80-acre Paddington Waterside ‘footprint’ takes in the station itself, new and old parts of St Mary’s Hospital and existing buildings stretching from East­bourne Terrace to the Hilton Metropole hotel on Edgware Road.

Outline planning permis­sion for the trans­for­ma­tion of the former Paddington goods yard was granted in 1992 but its imple­men­ta­tion was delayed by the downturn in the London property market and construc­tion did not begin until 2000. The first phase of the Sheldon Square office complex at Paddington Central opened in 2002. Marks and Spencer moved its head­quar­ters from Baker Street to Waterside House in 2004.

The final canalside project was the Brunel Building, which was completed in 2019 and is located on the corner of North Wharf Road and Bishop’s Bridge Road.

Having filled the water’s edge, devel­opers have now moved ‘inland’, with projects such as Paddington Exchange, a collec­tion of 123 apart­ments, and Paddington Gardens, a 3.8 acre devel­op­ment with four resi­den­tial buildings, a Marriott hotel and a primary school.

Algernon Newton’s 1925 painting Paddington Basin, now in the art gallery at Brighton Pavilion, earned him the nickname ‘the Regent’s Canaletto’.