A pleasing, if slightly twee, riverside residential district, situated across the Thames from Richmond 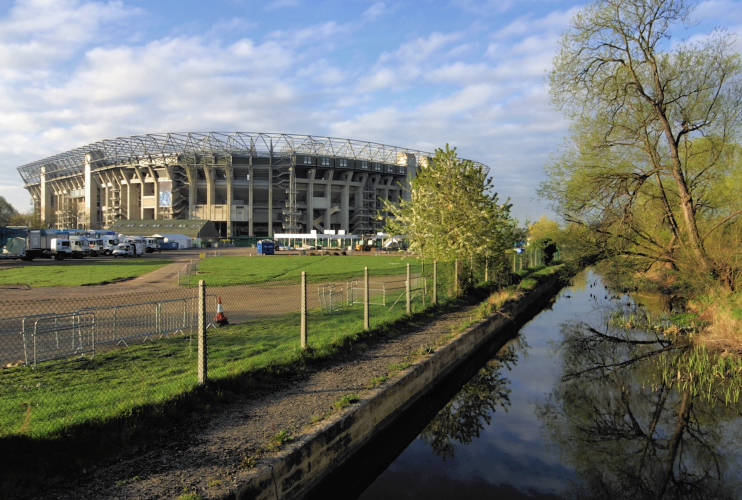 Pottery and flints found in Church Street date to 3000bc and some evidence of Roman occu­pa­tion has also been found. There is mention made of a settle­ment at Twick­enham, on the ground by Eel Pie Island, in ad704. It is thought that a church stood on the site of St Mary’s at the end of the 11th century. The village grew during the Middle Ages along Church Street and King Street and in alleys from them to the river, and was surrounded by stretches of open field and meadows.

By the early 16th century Richmond and Hampton Court had both become royal palaces. Twick­enham lay between them and members of the royal house­holds began to build homes in the area. By the 17th century a hamlet called Heath Row was linked with the main village by buildings along Heath Road. The present street pattern of central Twick­enham was all but estab­lished by 1635.

A small number of grand houses – including Orleans House (the surviving part of which has recently been restored), Marble Hill House and York House – later occupied the riverside and the village’s grassy river­front contributed to the famous view from Richmond Hill.

The terraces of Mont­pe­lier Row and Sion Road were built in the early 1720s and the White Swan public house dates from around the same time.

Traffic to the area increased with the building of a bridge to replace the ferry to Richmond in 1777. A good deal of building took place to the west of the green after the enclosure of 1818.

Further popu­la­tion growth followed the coming of the railway to Twick­enham in 1848. The original station was located at the northern end of Grosvenor Road and Queen’s Road, across London Road from its present site. Most of the neigh­bouring area was developed between 1880 and 1895, as was St Margarets to the north.

York Street was created in 1899 to bypass Church Street, which was too narrow to cope with the Richmond traffic. The increased traffic and the easier access by railway made Twick­enham less of a riverside retreat than it had been and in the latter part of the 19th century the large estates started to be broken up and sold off for plots for smaller houses.

In 1909 Twick­enham became the first permanent home of the Rugby Football Union. The site now covers 30 acres beside the Duke of Northumberland’s River (shown in the photo­graph at the top) and the stadium seats 75,000. There is a museum beneath the east stand with inter­ac­tive displays, period set pieces and items from the famous Langton collection.

The Harle­quins rugby club plays nearby at the Stoop Memorial Ground, named after their legendary player and statesman of the game AD Stoop.

Over the course of the 20th century, with central Twick­enham largely built up, devel­opers first shifted their attention outwards to local­i­ties such as Whitton and then began to replace the large houses that had char­ac­terised the district with more afford­able properties.

Despite the desir­ability of its housing and the visitor numbers generated by the presence of the stadium, the shops and restau­rants of Twick­enham lack the pulling power of those in Richmond. Indeed the main commer­cial streets are Twick­en­ham’s least attrac­tive aspect, while the riverside is undoubt­edly its highlight.

The vicinity of the station has been radically remod­elled in recent years – as has the station itself, as part of the Twick­enham Gateway project. Phase two of that project will see six retail units open and over 100 new homes be built by early 2021.

The writers John Gay, Jonathan Swift and Alexander Pope were nicknamed ‘the three Yahoos of Twickenham’ by Henry Bolingbroke. Pope was perhaps Twickenham’s most devoted champion, calling his riverside retreat ‘my Tusculum’ after Cicero’s villa outside Rome.

Twickenham’s other illustrious residents have included the philosopher and statesman Francis Bacon, the novelist Henry Fielding and the artist JMW Turner, whose house and garden on Sandycoombe Road have recently been restored.