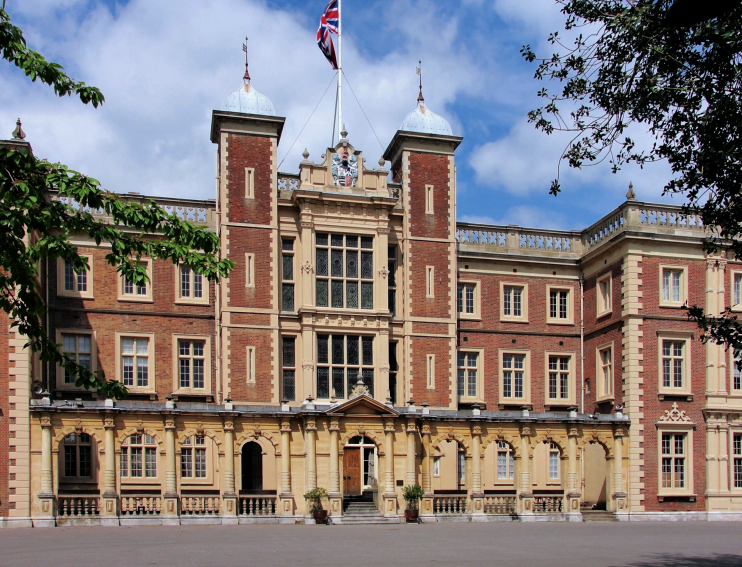 Whitton’s name probably means ‘white farmstead’ and it was first recorded (as Wytton) in 1274, when this was a hamlet on the edge of Hounslow Heath.

The German artist Sir Godfrey Kneller was the leading portrait painter of his day and founded the English Academy of Painting in 1711, the same year that he moved into Kneller Hall, his newly built home in Whitton.

In the 1720s and 30s the Earl of Islay, later third Duke of Argyll, laid out Whitton Park and built a stuccoed ‘green­house’ and a Palladian villa that came to be known as Whitton Place. The green­house was converted into a mansion in about 1766.

In the late 1840s Whitton Place and the first Kneller Hall were both demol­ished and the latter was replaced by the present building (shown in the photo­graph above*), where the Duke of Cambridge founded the Royal Military School of Music in 1857.

Whitton did not acquire a separate church from Twick­enham until 1862 and was still largely rural in character, with several straw­berry gardens, until subur­ban­i­sa­tion began in earnest at the beginning of the 20th century.

In the early 1910s devel­opers knocked down Whitton Park’s fine old buildings – including the greenhouse/mansion – and laid out a housing estate over the following 20 years.

The Chertsey Road sliced off the district’s south-east corner in the early 1930s. Later in that same decade Whitton acquired a High Street, with around a hundred shops, on what had previ­ously been a peaceful stretch of Percy Road. By 1950 bungalows and semi-detached houses had covered most of Whitton’s former gardens and parkland.

Twick­enham academy opened at the south-western end of Percy Road in 2010, orig­i­nally occupying the former class­rooms of Whitton school. A new main building was completed in 2013 at a cost of £21 million.

The Royal Military School of Music moved out of Kneller Hall in 2021 and the Ministry of Defence, which owns the site, has invited prospec­tive buyers to put forward bids. It seems reason­able to assume that the grade II listed hall will be converted to flats and some other homes may be built in the grounds. However, a large part of the site is desig­nated as metro­pol­itan open land, giving it the same status as green belt land, which means that this land should be protected from devel­op­ment. In addition, Richmond council has given legal protec­tion to over 300 trees on the site.

Because of the proximity of desirable Twick­enham, house prices have risen rela­tively rapidly in recent decades, espe­cially in what estate agents call the Kneller Hall area, where new homes have been built wher­er­ever they can be squeezed in. More than four-fifths of Whitton’s dwellings are owner-occupied, a very high proportion.

In the mid-1970s the singer/songwriter Elvis Costello lived in the newly built Palgrave House, Cypress Avenue. His father lived in another flat in the same block, not far from the Royal Military School of Music, where his own father had learned his craft as a trumpet player.

* The picture of Kneller Hall at the top of this page is adapted from an original photograph at Flickr, copyright Maxwell Hamilton, made available under the Attribution 2.0 Generic licence. Any subsequent reuse is freely permitted under the terms of that licence.