A large open space situated to the east of the River Crane in south-west Hounslow, with a public golf course and nurseries 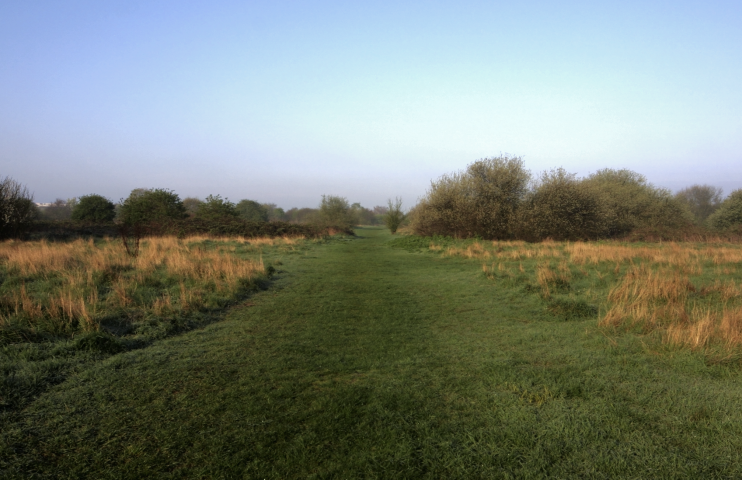 From the early 13th century the removal of tree cover on the ‘Warren of Staines’* began to create the bleakest terrain in Middlesex, which even­tu­ally stretched from Brentford to beyond the western boundary of modern London. Rudi­men­tary agri­cul­tural usage evolved after Henry VIII divided the land among 14 parishes in 1546.

In the 17th century the heath covered 25 square miles and was peppered with gibbets, erected for its notorious high­waymen. By the start of the 19th century it still encom­passed 5,000 acres but a combi­na­tion of enclosure acts and the exercise of squatters’ rights rapidly dimin­ished it. “Hounslow Heath,” wrote William Cobbett in 1830, “… is a sample of all that is bad in soil and villainous in look. Yet this is now enclosed, and what they call ‘culti­vated’. Here is a fresh robbery of villages, hamlets and farm and labourers’ buildings and abodes!” Sand and gravel mining began in the mid-19th century, wreaking further damage on the natural habitat.

In 1919 Hounslow Heath became the site of the first civil airport in the country. The earliest commer­cial flight was from Bristol to Hounslow and the inaugural scheduled air service was from Hounslow to Paris. On 12 November the first flight to Australia left Hounslow, arriving 28 days later. Commer­cial aviation moved to Croydon in 1920 and the airport closed. Its buildings were destroyed by fire in 1929 but a plaque in Staines Road marks the site.

Gravel extrac­tion continued until about 1976, and the resulting craters were filled with domestic refuse. A regen­er­a­tion programme has subse­quently restored around 200 acres of heathland, with gorse, broom and rushes. In 1991 the majority of the site was desig­nated a statutory local nature reserve. A municipal golf course has been laid out on the heath’s western edge and the unsightly tower blocks of Richmond council’s Hounslow Heath estate have claimed the south-eastern corner.

Hounslow Heath is also an electoral ward. More than half the residents of the ward are Asian or Asian British, and the Christian, Muslim, Hindu and Sikh faiths are all well repre­sented here.

Great armies were mustered on Hounslow Heath, including those of Oliver Cromwell and James II.

* Staines is a Thames-side town now in Surrey but formerly in Middlesex. Historically, a warren was an enclosed piece of land set aside for breeding game, especially rabbits.