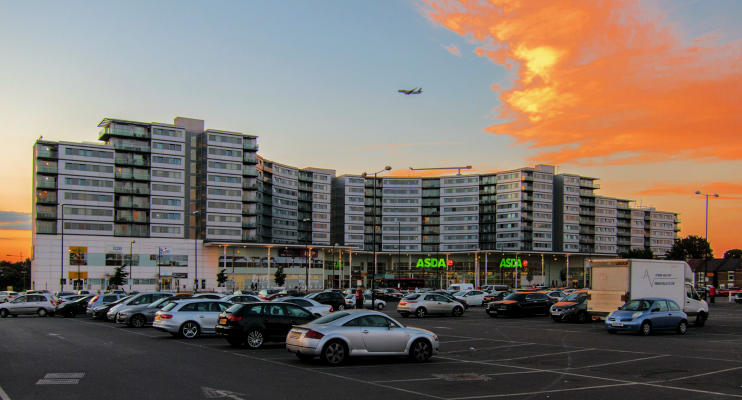 Hounslow was first mentioned in Domesday Book and the name is a corrup­tion of Old English words meaning ‘hound’s mound’. The mound may have been a burial tumulus but is not known whether the ‘hound’ element referred to the animal or a man of that name or nickname.

A Trini­tarian friary was estab­lished around 1200, in the vicinity of the present-day police station on Montague Road. At the time of the disso­lu­tion of the monas­teries, the friary was the richest Trini­tarian house in England. The friary’s chapel subse­quently evolved into Holy Trinity church.

By 1635 Hounslow had already acquired signif­i­cance as a coaching halt, conve­niently located just before the Bath and Staines roads diverged across Hounslow Heath. Although the village barely extended beyond the High Street, there were over a hundred residents and at least five inns, some of which had been in existence for more than a century. The separate village of Lampton lay to the north.

In the 18th and early 19th centuries Hounslow was the first stop outside London for nearly all the westbound coaches; in 1833 over 200 coaches passed through every day. Hounslow station opened in 1850 on a loop of the Windsor, Staines and South Western Railway and within a decade new roads were being laid out for suburban house­building. Devel­op­ment was slow at first and accel­er­ated only moder­ately after the arrival of the Metro­pol­itan District Railway in the 1880s.

In the early years of the 20th century the area around the High Street evolved into a proper town centre, and civic offices, a library and public baths were built on Treaty Road. Hounslow grew rapidly after the First World War, absorbing Lampton and Maswell Park and creating the new district of Hounslow West.

After the Second World War, council housing erased the last remaining fields, notably at Beavers Farm. Holy Trinity church was destroyed by arson and rebuilt in 1961.

The High Street was progres­sively rede­vel­oped from the 1960s onwards, with office blocks as well as shops. At this time large numbers of south Asian immi­grants began to settle in the area, at first because it was close to their point of arrival at Heathrow Airport, and then as a result of a snowball effect. Nowadays, most of Houn­slow’s residents are of Asian heritage. More than 60 per cent of these Asian/Asian British residents are of Indian origin or descent.

In the mid-1980s the shops and new library of the Treaty Centre replaced the civic buildings of Treaty Road.

In a contin­uing process of change, the apart­ments and commer­cial premises of the Blenheim Centre (shown in the photo at the top of this article*) opened in 2006, and the mixed-use Hounslow High Street Quarter will add a new public square, a 27-storey resi­den­tial tower and a multiplex cinema, with the final resi­den­tial comple­tions expected in late summer 2020.

The heroine of the 2002 British movie Bend It Like Beckham plays football for the fictional Hounslow Harriers.

* The picture of the Blenheim Centre, at the top of this page is a slightly modified version of an original photograph, copyright Peter McDermott, at Geograph Britain and Ireland, made available under the Attribution-ShareAlike 2.0 Generic Licence. Any subsequent reuse is freely permitted under the terms of that licence.