A postwar housing estate in west Hounslow (or Hounslow West as the area is often called, because of the name of the tube station) 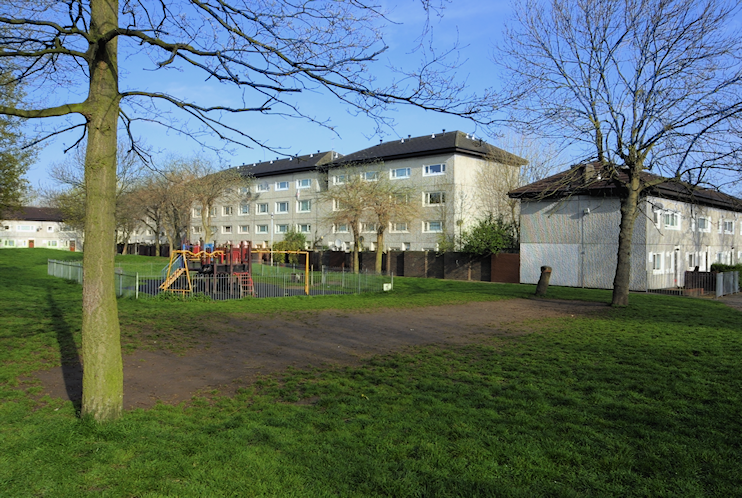 In 1793 cavalry barracks were built on Hounslow Heath and the site is still in use today, on Beavers Lane. The stables have been converted to accom­mo­da­tion and are part of a conser­va­tion area.

To the north-west of the barracks, the Beavers Farm estate (also known as the Beavers estate, and shown in the photo above) was built from the early 1950s.

The ‘Beavers’ name is not related to the presence of dam-building rodents but is a folksy corrup­tion of ‘Babers’ – Upper and Lower Babers were parcels of land here. However, the furry animal theme was taken up with a vengeance by the municipal planners, creating some of the most ridicu­lous street names in Greater London.

Beavers county primary school and the church of the Good Shepherd were built to meet the educa­tional and spiritual needs of the new estate’s residents, the latter using money saved by not recon­structing the bombed church of St John of Wapping.

The estate suffered from a variety of problems around the turn of the millen­nium, including acts of vandalism and what police called “one of the worst and most persis­tent cases of fly-tipping” ever seen in the borough, which resulted in a £5,000 fine for the offender in 2003. The council’s response to the diffi­cul­ties included regen­er­a­tion funding, warden patrols and co-ordinated clean-ups.

At Beavers community primary school, on Arundel Road, many pupils speak English as an addi­tional language and there is also a high propor­tion with special educa­tional needs. Many pupils only stay at the school for a rela­tively short time because they come from military families stationed temporarily at Hounslow barracks. Despite the chal­lenges, Ofsted has rated the school outstanding since 2014.