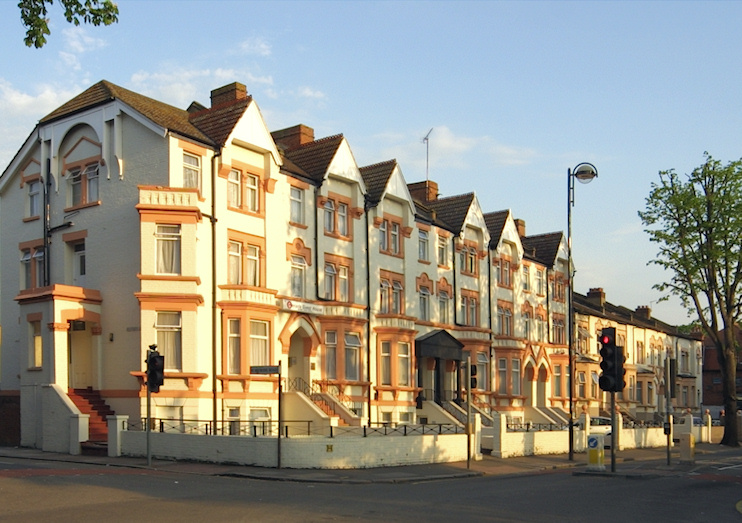 The existence of Lampton – a ‘farm or estate where lambs are reared’ – was first docu­mented in 1376. From the early 18th century the village was the property of the Bulstrodes, lords of the manor of Hounslow. There was a Black Horse Inn in Lampton as early as 1759.

Built in the 1810s, Lampton’s oldest and finest house is The Lawn, which stands at right angles to Lampton Road opposite its junction with Avonwick Road – and is shown in the photo­graph below.* Its most distinc­tive features are the Doric porch and the fringed cast-iron hoods above all the front windows. Around to the side, The Lawn’s original cast-iron gate has survived and – like the house itself – is grade II listed. 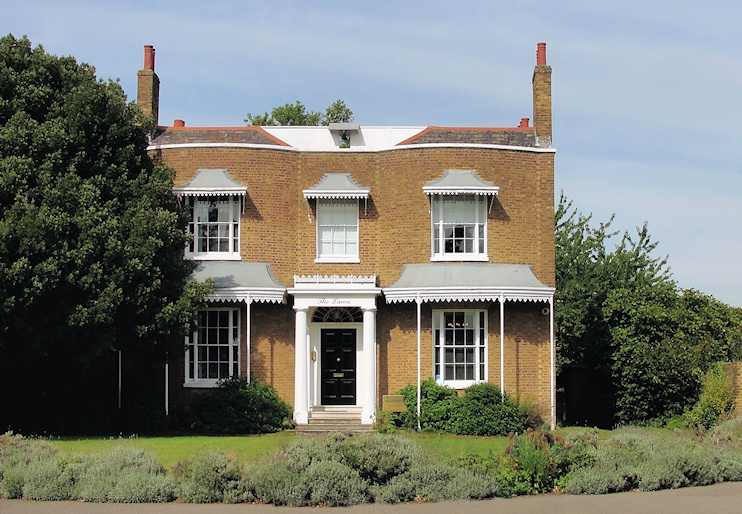 Until late in the 19th century Lampton remained a “small village or hamlet in Heston parish … [with] few inhab­i­tants, prin­ci­pally depending on agri­cul­ture and brick­making.” The Bulstrode family devised an ambitious plan to develop the land on either side of Lampton Road in 1881 but economic condi­tions became unfavourable, only a few grand houses were built – and most of them have since been replaced. One surviving mansion is now the borough register office.

The District Railway (now the Piccadilly line here) arrived in the mid-1880s. Montague Road, Queen’s Road and Balfour Road were laid out with terraced housing around the turn of the 20th century and the village began to merge into Hounslow. The Black Horse was rebuilt in 1926.

Opened in 1930, the 40-acre Lampton Park is situated to the west of the locality, beside the highly regarded Lampton school.

Shown in the CGI below, a new neigh­bour­hood called the Staging Post has recently replaced the low-rise pavilions of Hounslow civic centre, which were only completed in 1975 but had appar­ently become outdated. The scheme, a part­ner­ship between Notting Hill Genesis and Bouygues Devel­op­ment designed by Allies and Morrison, consists of 919 units – 459 for private sale, 370 for shared ownership and 90 at afford­able rent. 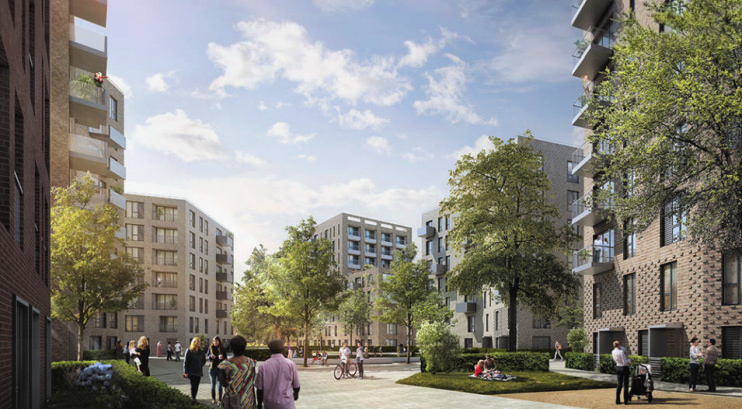 The picture of ‘The Lawn’ in Lampton Road on this page is adapted from an original photograph, copyright Maxwell Hamilton, at Flickr, made available under the Attribution-NonCommercial 2.0 Generic licence. Any subsequent reuse is freely permitted under the terms of that licence.