A privately built housing estate in north Twickenham, tucked into a loop of the River Crane (which separates it from St Margarets), where it nears the end of its circuitous journey to the Thames 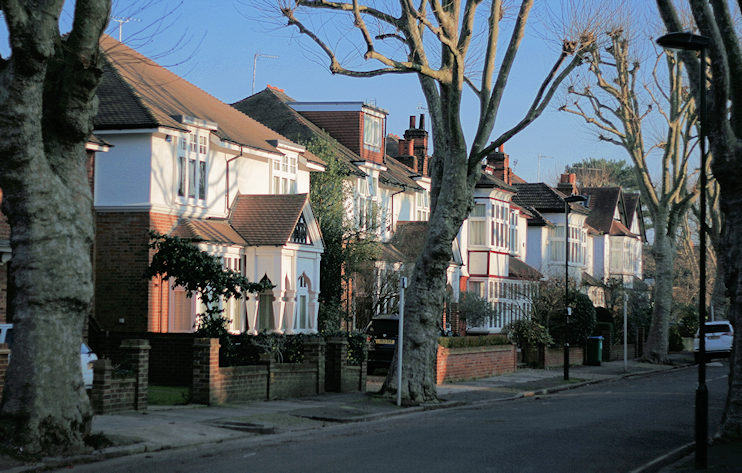 Thomas Cole founded a brewery on London Road early in the 17th century and his descen­dants provided refresh­ment to local people for nearly 300 years.

In 1892 George Cole sold the brewery to Brandon’s of Putney, which carried on oper­a­tions here for another 14 years. The brewery at that time filled the area between the River Crane (at what was called Cole’s Bridge) and the railway line, on the west side of London Road. This later became the site of a Royal Mail sorting office, which has recently been replaced by St James’s Brewery Wharf development.

George Cole used part of the proceeds to clear the family’s debts and planned to invest the balance in laying out an estate of 140 detached houses on the family’s land east of London Road, extending as far north as Ivy Bridge. The prop­er­ties were to have all the latest conve­niences, including elec­tricity, which had just arrived in Twick­enham. Cole and his agent drafted a scale of prices that rose to £1000, or £70 annual rent, for a property with six bedrooms.

The first house in Cole Park was completed in 1898 and twenty were occupied by the turn of the century. In 1902 Moor Mead bridge was built, carrying Hill View Road across the River Crane and providing residents with access to what is now called Moormead Park. Down in the estate’s south-east corner a land­scaped communal area was laid out, with facil­i­ties for croquet and tennis. A new channel was dug to divert the River Crane along the eastern edge of the gardens.

George Cole continued to direct the Cole Park project until his death in 1910, when his brother took up the reins. The estate was completed between the wars and the Cole Court hotel replaced Ivy Lodge – the one house that had stood on the east side of London Road before the project began. In the early 1930s eight houses were demol­ished to make way for the Chertsey Road.

During the Second World War the Cole Court hotel served as a dancehall for American soldiers from the Bushy Park garrison. After the war the hotel lay vacant until its purchase in 1950 by the newly formed Twick­enham district masonic council. Cole Court presently doubles as a masonic lodge and a venue for hire.

The low-roofed terraces of Lancaster Place were built in the early 1970s on the site of the residents’ communal gardens. Further north, the estate’s allot­ments have survived.

Nowadays the most frequent form of change in Cole Park is for residents to add exten­sions to their homes, where permis­sion can be obtained.