The second largest but least known of the eight royal parks of London, situated between Teddington and the Thames at Hampton Court 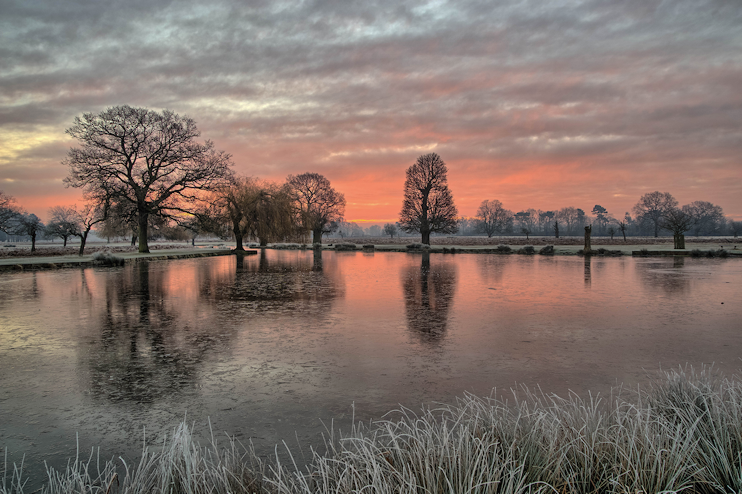 A Bronze Age barrow and burial mound has been excavated near Sandy Lane and its contents are in the British Museum. There is evidence of medieval settle­ment and traces of the largest and most complex field system in Middlesex.

The park was created in the early 16th century to provide a hunting ground for Hampton Court and the Longford river was cut across the park in the late 1630s to provide the palace with fresh water. Sir Christo­pher Wren created Chestnut Avenue as a formal approach to Hampton Court Palace, with the Arethusa, or Diana, fountain as its centrepiece.

The earls of Halifax beau­ti­fied the park in the early 18th century but also enclosed it with a wall. A footpath named Cobbler’s Way recalls Timothy Bennet’s successful campaign in the early 1750s to regain free access for the public. The Hampton Wick shoemaker was so pleased with his achieve­ment that he wrote a play on the subject. 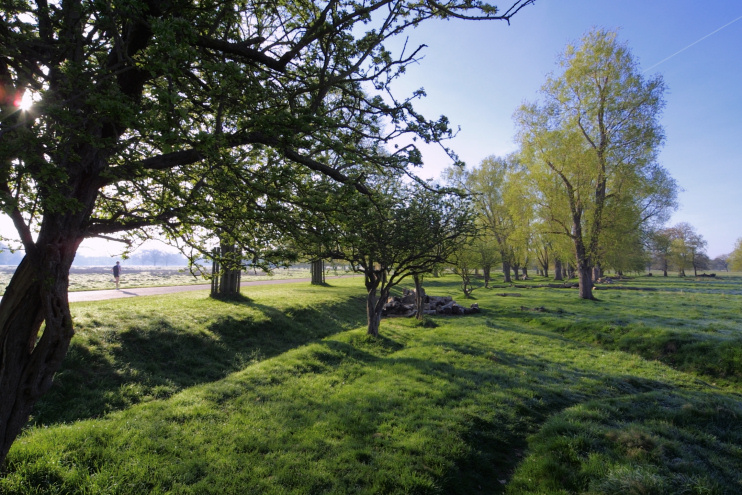 Teddington hockey club began playing in Bushy Park in 1871 and is the world’s oldest hockey club with a contin­uous history.

In 1900 Queen Victoria gave Bushy House to the Commis­sion of Works for the estab­lish­ment of the National Physical Labo­ra­tory. The labo­ra­tory remains on the same site, where it has vastly expanded the scale of its oper­a­tions. Among its many roles, the NPL is respon­sible for regu­lating Greenwich Mean Time.

George V gave permis­sion for Upper Lodge to become a home for Canadian conva­les­cents during the First World War and in the next war the park became the site of Camp Griffiss, which General Dwight Eisen­hower made the centre for planning the 1944 D‑Day invasion. Eisen­hower moved out to a quiet cottage here to escape the distrac­tions of central London, bringing only a naval aide, an orderly and ‘two negro soldiers’, who all stayed with him until the end of the war.

The park has few facil­i­ties but an abundance of pastoral scenery, including woodland gardens.

* The picture of Bushy Park before dawn with ice at the top of this page is resized from an original photograph, copyright Derek Winterburn, at Flickr, made available under the Attribution-NoDerivs 2.0 Generic licence. Any subsequent reuse is freely permitted under the terms of that licence.