The south-eastern corner of Teddington, separated from the rest of Hampton by Bushy Park 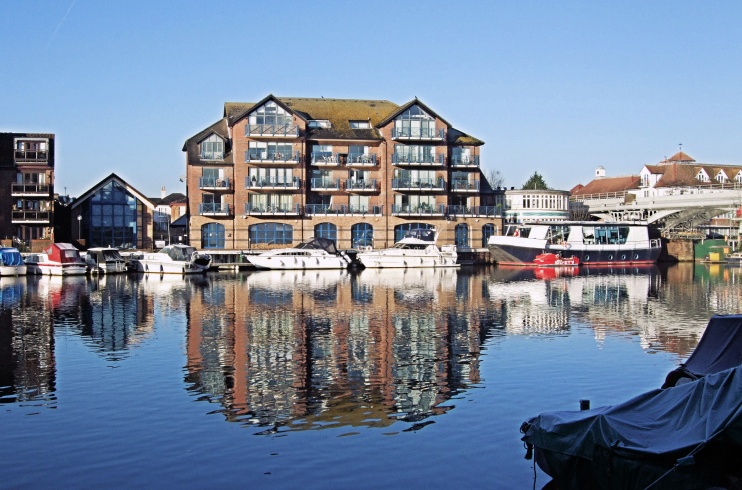 A ‘wick’ often referred to a harbour or trading place and this landing point beside the Thames is likely to have been used to supply provi­sions for the original manor house of Hampton, which evolved into Hampton Court Palace.

The construc­tion of the wooden Kingston Bridge in 1219 added to the signif­i­cance of the location, yet it remained an undis­tin­guished hamlet for several centuries. In 1527 Cardinal Wolsey conducted nego­ti­a­tions at Hampton Court for an alliance with France, and the French ambas­sadors lodged in “the village at the end of the park,” which was probably Hampton Wick.

Thomas Burdett bequeathed the sum of £50 to the poor of Hampton Wick in 1695, the profits to be spent on coals or wood and distrib­uted yearly on St Thomas’s Day in perpetuity.

A few cottages survive at Hampton Wick from the early 18th century, but these do not seem to include the Hovel, which the Irish writer Richard Steele either rented or built for himself in 1707.

Modern growth did not begin until the early 1830s, when the church of St John the Baptist was built. The civil parish of Hampton Wick was created in 1831, covering 1,235 acres of land and 69 acres of water.

Hampton Wick station opened in 1863 and in that same year the Wick separated itself from Hampton by estab­lishing its own local govern­ment board.

A Roman Catholic chapel was built in 1882, and a convent was added three years later. The local board built its offices on the High Street in 1884 and the assembly rooms opened on Park Road in 1889.

Most of the village was built up around the turn of the century. By 1900 the High Street had 51 shops and seven public houses. The present incar­na­tion of the Swan (shown in the photo­graph*) dates from 1905.

By the outbreak of the Second World War almost all the Wick’s old cottages and mansions had been replaced by housing for the commuting middle classes.

Devel­op­ments in the second half of the 20th century included Broom Park and Elton Close in the 1960s, Becketts Place in the 1980s and Spinnaker Court (shown in the photo at the top*) in the 1990s.

More recently there has been intensive new house­building on the site of the former gasworks on Sandy Lane.

The demo­graphic profile of Hampton Wick closely mirrors that of the borough as a whole, which means that it is signif­i­cantly more upmarket than most parts of London.

In the late 1970s television comedy George and Mildred, the eponymous couple moved to the fictional Peacock Crescent on an ‘executive housing estate’ in Hampton Wick after their Earls Court home was compulsorily purchased. The writers’ choice of this setting was undoubtedly influenced by the fact that ‘Hampton Wick’ is cockney rhyming slang for the male member.

* The picture of Spinnaker Court at the top of this page is slightly modified from an original photograph, copyright Jim Linwood, at Flickr, made available under the Attribution 2.0 Generic licence and the picture of The Swan, Hampton Wick is adapted from an original photograph, copyright Des Blenkinsopp, at Geograph Britain and Ireland, made available under the Attribution-ShareAlike 2.0 Generic Licence. Any subsequent reuse is freely permitted under the terms of those licences.