A large and comfortable Victorian and Edwardian suburb, located south of Twickenham

Teddington was first docu­mented in the eleventh century, although it is not mentioned in Domesday Book. Its name probably derives from words meaning ‘farmstead of a man called Tuda’. In the Middle Ages the village grew near the river, around St Mary’s Church and the manor house.

The oldest main road ran along the route of the Twick­enham Road and Kingston Road and connected the London–Hounslow road with the bridge from Hampton Wick to Kingston in 1219. There was a fishing weir on the Thames at Teddington between 1345 and c.1535. A road, now Walde­grave Road through to Park Road, probably came into existence to cater for traffic to Hampton Court, a royal palace from about 1525.

Some large houses were built as a result of the increasing popu­larity of nearby Richmond in the 17th and 18th centuries, the first probably in 1672. One of the few remaining is Elmfield House, which is now used by Richmond council.

By the 18th century the High Street was inter­mit­tently lined with houses and there was a separate little settle­ment in Park Road. The common land, which was part of Hounslow Heath, and the open fields to the north and south of the village were enclosed in 1800.

Visible on the right in the photo­graph above,* Teddington Lock was constructed in 1811 and marks the end of the tidal reach of the Thames. It was rebuilt with an addi­tional side-lock in 1857.

The sale of the manorial estate and the opening of Teddington station in 1863 led to a deluge of middle-class housing being built, including at South Teddington. Small terraces went up between Stanley Road and Walde­grave Road, and Broad Street became a street of shops. Manor Road had been laid out in 1861 but the rest of that end of the high street, although it grew rapidly, was not so densely filled.

By 1871 the parish of Teddington had four times as many houses as it had had a decade earlier. Among the major buildings opened in the 1870s and 1880s were St Peter’s Church, a cottage hospital, a town hall and St Alban’s Church. Of these, only the churches survive, the latter as the Landmark Arts Centre. A foot­bridge over the lock replaced the ferry from 1889. 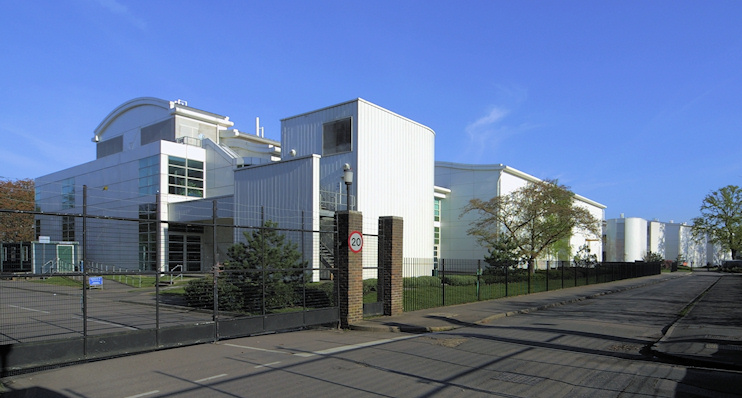 The National Physical Labo­ra­tory opened in 1902 (see also Bushy Park). Nowadays the labo­ra­tory is the UK’s principal national measure­ment institute and also collab­o­rates with academia on a variety of research projects. Some of its newer buildings are shown in the photo above.

The coming of tram services in 1903 stim­u­lated building around the Kingston Road area and by the outbreak of the First World War most of the existing streets and housing were in place.

Film-making began at Teddington Studios in 1912 and boomed after Warner Bros leased and then bought the operation in the 1930s, when Teddington was said to have produced 10 per cent of British films. The studios were substan­tially rebuilt after being bombed during the Second World War and subse­quently switched to tele­vi­sion produc­tions. They closed in 2014, to be replaced by a couple of hundred flats.

Various commer­cial premises opened after the Second World War, primarily in the form of offices and workshops, and a council estate was built at Udney Park. Teddington business park opened in 1984 on the site of an old coal yard in Station Road. In recent years blocks of upmarket flats have been built wherever planning permis­sion can be obtained.

131 Waldegrave Road was the birthplace and childhood home of Noel Coward.

* The picture of Teddington Lock at the top of this article is adapted from an original photograph, copyright Hugh Venables, at Geograph Britain and Ireland, made available under the Attribution-ShareAlike 2.0 Generic Licence. Any subsequent reuse of the image is freely permitted under the terms of that licence.