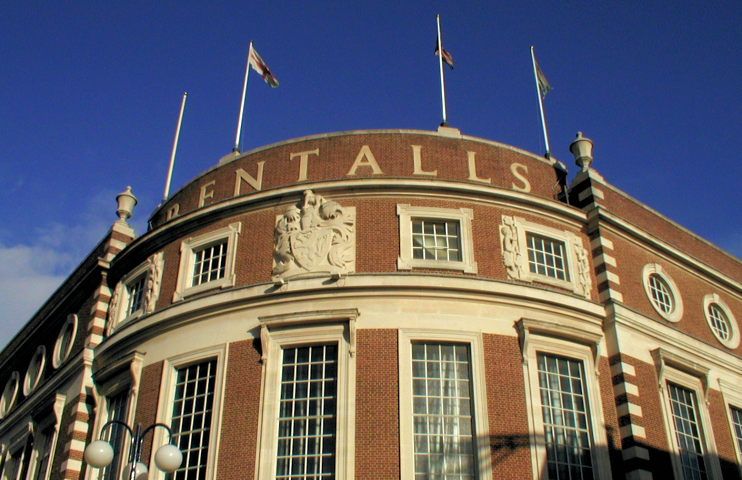 There is consid­er­able evidence of Roman occu­pa­tion and it is claimed (though less credibly) that Julius Caesar crossed the Thames here. In 838 Kingston was chosen as the seat of the great council convened by King Egbert and presided over by Ceol­nothus, Arch­bishop of Canterbury.

The town’s long asso­ci­a­tion with royalty continued in the tenth century with Edward the Elder, son of Alfred the Great, who was the first of seven Saxon kings to be crowned here. The Coro­na­tion Stone, probably the town’s most notable posses­sion, stands by the twelfth-century Clattern Bridge over the River Hogsmill, outside the more recent Guildhall.

Kingston was an important royal manor by the time of Domesday Book, which declared that it had a church, five mills and three salmon fisheries; the borough badge (coat of arms) has an escutcheon charged with three salmon on an azure field.

Kingston’s post-Norman signif­i­cance owes much to its bridge, which was for nearly a thousand years the lowest Thames crossing except for London Bridge.

There has been a market in Kingston since at least the 13th century, and pottery, fishing, tanning and the wool trade were key indus­tries throughout the Middle Ages. The grammar school was founded in 1561.

Kingston was an important coaching town in the 18th century but the Druid’s Head is the only contem­po­rary survivor from the inns of that period. The town’s transport links were improved when a stone bridge replaced its wooden prede­cessor in 1828 but civic resis­tance blocked the arrival of the railway until 1863, although Kingston-on-Railway opened at Surbiton in 1838.

Kingston’s resi­den­tial popu­la­tion leapt when private estates such as Richmond Park were added along Richmond Road in the 1930s. At the far end of that road, the pioneering Sopwith Aviation Company was succeeded by Hawker Engi­neering, which manu­fac­tured cars and motor­cy­cles as well as the aircraft for which it is best known.

Kingston has become the prime retail location for south-west London, yet retains one of the best medieval street plans outside the City. Its flagship store, Bentalls, opened in 1867 and was recon­structed at the end of the 1980s, when it met with compe­ti­tion from John Lewis. At the same time a trans­for­ma­tion began with the construc­tion of a relief road, which permitted the pedes­tri­an­i­sa­tion of the town centre. Bentalls has been part of the Fenwick group of depart­ment stores since 2001.

Several new and regen­er­a­tive devel­op­ments have recently been completed in the area, including the replace­ment of the existing Eden Walk shopping centre with a retail/services/residential scheme, 328 resi­den­tial units and a linear park at Queen­shurst in North Kingston, a major new ‘learning resource centre’ for Kingston Univer­sity and the rede­vel­op­ment of the Old Post Office site with 319 homes and various amenities, as shown in the developer’s CGI below. 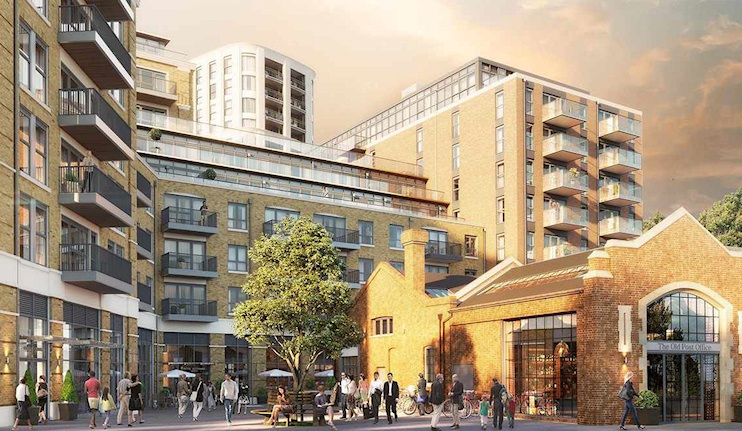 A notable feature in Old London Road is the set of tumbling telephone boxes created in 1988 by the Scottish sculptor and installation artist David Mach.