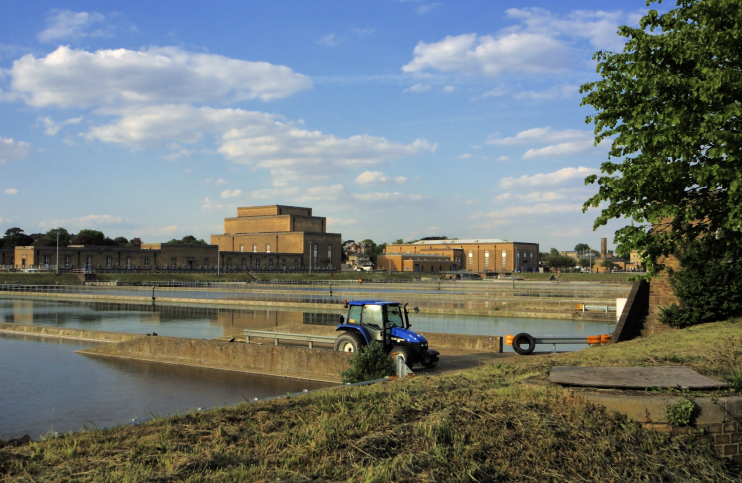 Hampton’s name is used both for the Thames-side locality west of Bushy Park and for the entire district that extends from Marling Park and Nurs­ery­lands in the west to Hampton Wick, three miles to their east.

The early village, surrounded by arable land, would have been centred on Thames Street and Church Street and the southern end of the High Street. There are records of a church on Thames Street, on present site of St Mary the Virgin, in 1342. By 1500 the popu­la­tion of Hampton and Hampton Wick was over 300, a figure that had doubled by 1600 and doubled again by 1700.

In 1754 the actor David Garrick came to live at Hampton House, now Garrick Villa, and built an octagonal ‘temple to Shake­speare’ in the part of the garden beside the Thames. Shown in the photo­graph below, the tiny temple is open free of charge on Sunday after­noons from the first Sunday in April to the last in October. Garrick’s grade‑I listed house, now converted to nine apart­ments, is strictly off limits to the public.

The 1852 Metro­pol­itan Water Act prohib­ited the London water companies from taking water from below the tidal reach of the river and the conse­quent building of a water­works here (shown in the photo­graph above) was to change Hampton radically.

Pumping stations, reser­voirs, filter beds and asso­ci­ated buildings were constructed along the river, altering the appear­ance of the area and employing large number of people in addition to the labour needed to build the works.

Hampton station opened in 1864 and this stretch of the river, and its islands, became popular for house­boats, regattas and picnicking.

The area around the station was mostly developed in the 25 years after 1880; the River Hill Estate (between Plevna Road and Belgrade Road) was laid out in 1878; and the area around Carlisle Park started to be developed, slowly, from 1897.

The little islands called Garrick’s Ait and Platt’s Eyot were raised in height when soil was deposited on them during the exca­va­tion of more filter beds in the last years of the 19th century.

An open-air pool opened on the High Street in 1922 but closed in 1981 when it was no longer consid­ered finan­cially viable by the council. Local enthu­si­asts managed to keep it from being disman­tled and it reopened in 1985 as a heated swimming pool, open all year round.

The pump houses of the riverside water­works are no longer in use but are listed buildings. Some of the filter beds are no longer needed but the land has green-belt desig­na­tion, which Thames Water wants to have lifted so that it can develop the area; so far, the company has been unsuccessful.