The popular north-eastern corner of Hampton, bordering Teddington and Fulwell, with terraces of thriving specialist shops and restaurants 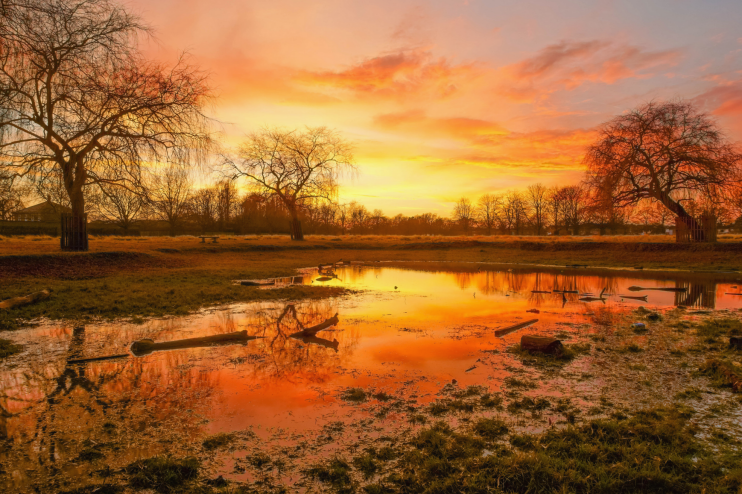 There is no detectable hill here; merely slightly higher ground that may once have lain above the Thames flood plain. Before the Act of Enclosure of 1811 the area that is now Hampton Hill was common land used for grazing cattle, the only buildings being Upper Lodge in Bushy Park and the windmill, which had been constructed in the 1780s to grind corn and grain. A map of 1839 shows the High Street, Burton’s Road and Windmill Road, with a few buildings along the High Street and at the High Street end of Windmill Road, all surrounded by fields.

By 1850 the locality had 24 traders, and the popu­la­tion grew as labourers constructing the water­works along the river at Hampton came to live here, usually in very poor condi­tions. In 1863 St James’s church was built and its first vicar – a clergyman of private means named Fitzroy John Fitzwygram – set about building cottages and houses for the labourers and improving amenities.

By the late 1870s the windmill had been demol­ished and the popu­la­tion had risen signif­i­cantly. In 1890 the area was renamed Hampton Hill, having previ­ously been known as the Common and New Hampton. A tram service began in 1903 and Hampton Hill was on the route from Stanley Road to Hampton Court. The High Street saw some changes when the tramway converted from single to double tracks a little later, and some buildings had to be demol­ished to allow the road to be widened.

During the First World War a camp was set up for Canadian soldiers in Bushy Park, with Upper Lodge used as a hospital. Many of the soldiers who died there are buried in St James’s churchyard.

Most of Hampton Hill’s market gardens disap­peared after the Second World War. The site of the last, St Clare’s, was taken in 1990 for a Sainsbury’s supermarket.

More recently, alter­ations have been made to the stretch of the High Street between Windmill Road and Park Road, with some flats among the new buildings.

Hampton Hill playhouse is a 200-seat theatre, with a 50-seat studio theatre, built in 1998. It is the home of Teddington Theatre Club.

Hampton Hill was the birthplace in 1947 of Queen guitarist and astrophysicist Brian May. He was educated at Hampton school.

The picture of Hampton Hill Pond at sunset at the top of this page is reformatted from an original photograph, copyright Derek Winterburn, at Flickr, made available under the Attribution-No Derivatives licence. The picture of School Road Avenue is adapted from an original photograph, copyright Des Blenkinsopp, at Geograph Britain and Ireland, made available under the Attribution-ShareAlike 2.0 Generic Licence. Any subsequent reuse is freely permitted under the terms of those licences.