A village located at the north-western corner of Heathrow airport, one mile south-west of Harmondsworth 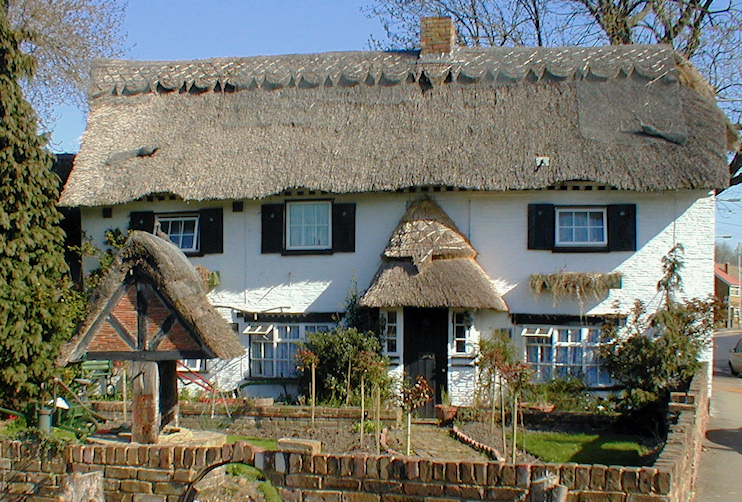 Long­ford’s name comes from an oblique crossing over the River Colne, and was for many years written – and pronounced – as two separate words. The village grew up as a halt on the Bath Road and had 30 houses by 1337, but devel­op­ment was limited by the suscep­ti­bility to flooding of the low-lying land.

Its waterside location made milling the dominant activity; from medieval times farmers brought corn, barley and wheat here. Paper mills came after­wards, and later still an asso­ci­ated printing works. The White Horse inn was in existence by the 17th century and survives today, together with a handful of houses and cottages from that period. Longford had a village shop by 1839.

The opening of the Colnbrook by-pass in 1929 and subse­quent traffic exclusion measures and conser­va­tion area status have helped preserve Longford’s remark­ably villagey character, despite quite a few intru­sions from the late 20th century. To the east of the village there are several airport-related commer­cial premises.

The Longford River is an arti­fi­cial water­course that Charles I had constructed to provide water for the lakes at Hampton Court and Bushy Park. The course of the river was changed in the 1940s as a result of the creation of London (now Heathrow) Airport and was changed again with the construc­tion of the fifth terminal.

On the west side of the village, Heathrow Special Needs Centre provides an envi­ron­ment in which people of all ages who have special needs and/or disabil­i­ties can be in contact with horses and farm animals. Visits are by appointment.

Nearby Long­ford­moor is the west­ern­most place in Greater London. Moor Bridge has provided the link to Longford since the 15th century, while Mad Bridge crosses the Wraysbury River and leads to Poyle – now in the borough of Slough – where apple grower Richard Cox created the Orange Pippin around 1825. Long­ford­moor found itself more isolated than ever following the construc­tion to its south of the access road connecting the M25 with Terminal 5.

If the proposed construc­tion of a third Heathrow runway goes ahead, the entire village of Longford will be erased from the face of the earth, sometime after 2021.