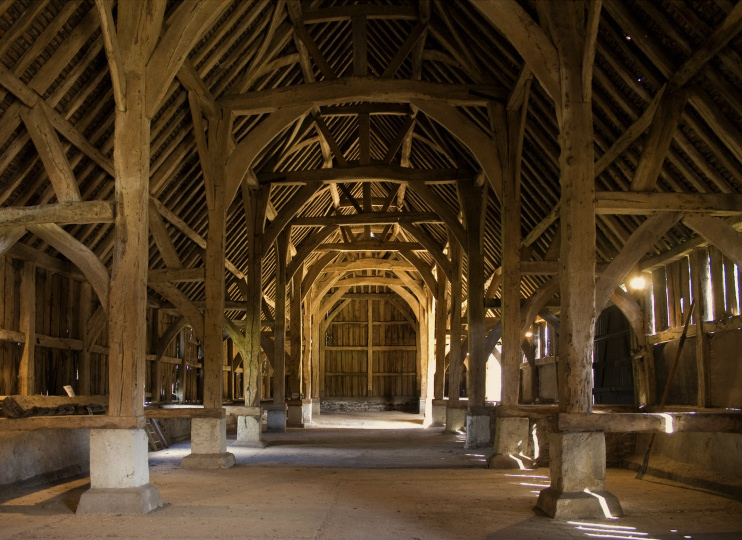 Evidence has been found here of Iron Age huts and sixth-century Saxon dwellings. In 1069 William the Conqueror gave the parish church and the manor to the Bene­dic­tine Abbey of Holy Trinity, Rouen, later known as St Catherine’s. The abbey rebuilt the church and the oldest parts of the present structure date from the mid-twelfth century.

Around 1211 the abbey estab­lished a priory here that became increas­ingly unpopular for the taxes it imposed on the manorial tenants, who in 1281 burned down some of its buildings. The manor of Harmondsworth was appro­pri­ated in 1391 to Winchester College, which commis­sioned the construc­tion of an aisled, timber-framed barn for the manor farm. Completed in 1427, it was the last in a series of vast barns built on this site and is the largest medieval English barn to have survived intact. Bought by English Heritage in January 2012 and shown in the photo­graph above,* the barn is open to the public on the second and fourth Sundays of each month between April and October.

The Grange and Harmondsworth Hall were among the grandest of the homes built in the 17th century and both remain in existence, the former as offices and the latter as a hotel, with an 18th-century brick front.

Once part of Hounslow Heath, the land around Harmondsworth was steadily enclosed from the 1750s and brought under culti­va­tion. Orchards and market gardens were estab­lished in the latter part of the 19th century.

The village grew slowly but did not change signif­i­cantly from its medieval form until the opening of the Colnbrook bypass in 1929. This brought some suburban housing, and to the south of the village, commer­cial premises, notably in the form of Penguin Books in 1937. When the walls and roof of the Penguin warehouse were first erected, there were still cabbages growing amidst the stacks of books and the company’s founder, Sir Allen Lane, insisted they should be sold to recoup part of the outlay.

The devel­op­ment of Heathrow Airport since 1945 has erased all former traces of the parish south of Bath Road but the vicinity of the High Street remains an authentic delight, and is now both a conser­va­tion area and an archae­o­log­ical priority area. However, if the proposed plan for a third runway at Heathrow overcomes all the remaining obstacles most of Harmondsworth will have to be demol­ished – but the church and the barn will be saved, though the former will have few parish­ioners. The airport’s new perimeter would extend just a fraction beyond the northern tip of present-day Swan Lake. The lake is visible centre-left in the satellite view below.

Harmondsworth has not acquired the diverse ethnic mix of other Heathrow ‘suburbs’, although a small minority speaks a language other than English, most commonly Punjabi, Bengali, Somali or Gujarati.

* The picture of Harmondsworth Great Barn on this page is adapted from an original photograph, copyright Prioryman, at Wikimedia Commons, made available under the Attribution-ShareAlike 3.0 Unported licence. Any subsequent reuse is hereby freely permitted under the terms of that licence.