A riverside locality situated between Twickenham and Teddington, centred on one of London’s most sumptuous mansions 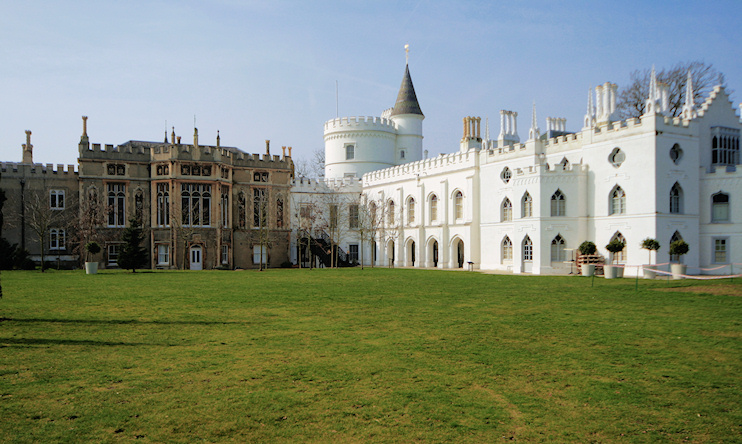 In 1698 the Earl of Bradford’s retired coachman built or bought a house here, which was acquired in 1747 by the politi­cian and man of letters Horace Walpole. He renamed the house Straw­berry Hill, after a field in the grounds. Straw­ber­ries are known to have been grown in the area before this time and commer­cial fruit gardens were later estab­lished nearby. Like Hampton Hill and Marble Hill, there is no real hill here, merely a slight elevation of the terrain.

Walpole spent much of his life adding extra rooms and features to the ‘little cottage’, creating a Gothic fantasy that became famous throughout Europe, set in a nine-acre land­scaped garden. After Walpole’s death in 1797 the property passed to his relatives, the Walde­grave family. Frances, widow of the seventh Earl of Walde­grave, added a new wing of her own design in 1862. In the following year the railway passed to the west of the house but it was ten years before a station opened in Straw­berry Hill.

Some have suggested that the station was built at the behest of the countess, for the conve­nience of her house guests, but it is more probable that property spec­u­la­tors pres­surised the railway company into providing the facility.

One of these devel­opers was Chich­ester Fortescue, Frances’s fourth husband, who laid out streets of villas on the edge of the family estate.

House­building continued to fill out the area into the early 20th century.

St Mary’s College (now St Mary’s Univer­sity) moved from Brook Green to Straw­berry Hill in 1925, and the mansion was further extended. Much of the building has recently been restored and the process will continue for a while yet. It is open for public viewings but advance booking is advisable.

South of Walde­grave Park, the Fieldend estate was completed in 1960 by the renowned builders of modern homes, Span Devel­op­ments.