A canalside commercial zone in south-west Uxbridge, on the far western edge of Greater London 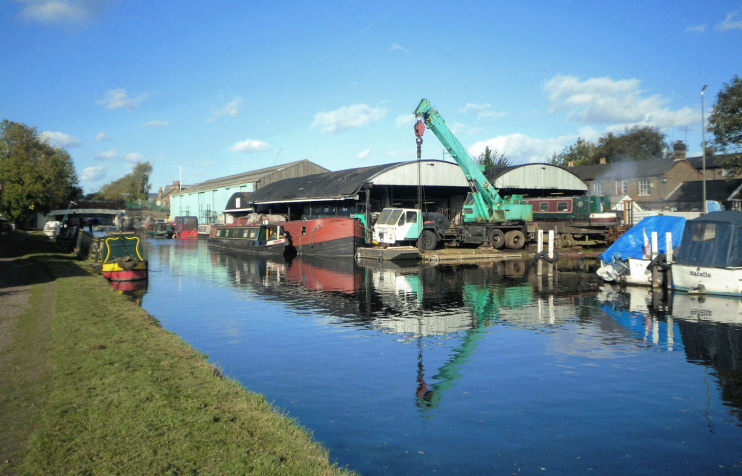 The Grand Junction (now Grand Union) Canal was dug through the moor in 1794, connecting Uxbridge with the Thames at Brentford. By 1800 the link to Birm­ingham was complete. Wharves and ware­houses were constructed along the canal and coal for the surrounding district was offloaded here, while corn was taken aboard. Oil and mustard mills, glass and gas works prompted the building of workers’ homes, followed by the church of St John’s on the Moor in 1838 and a ragged school eight years later, both on Waterloo Road (and both since departed).

Except for the part to the north-east of Cowley Mill Road, Uxbridge Moor is still primarily a commer­cial zone, nowadays taking the form of a network of indus­trial estates and business parks. The coatings specialist Trimite is one of the larger busi­nesses operating here. The photo­graph above* shows Uxbridge Boat Centre, a repair yard and chandlery at Uxbridge Wharf, on the Grand Union Canal.

Uxbridge’s resi­den­tial boom has been making itself felt at the edges of the commer­cial area, for example in four blocks of apart­ments built on the site of a former Ford deal­er­ship at the corner of St John’s Road and Cowley Mill Lane.

The London Wildlife Trust manages a stretch of the bank that has willow woodland and meadows, at the north end of Riverside Way indus­trial estate, where a branch of the River Colne flows into the canal.

Cricket was played on the moor from at least 1735. Uxbridge cricket club was founded here in 1789, and England played Kent at the ground in the same year. The club moved to Uxbridge Common in the 1820s.

* The picture of the London Loop at Uxbridge Boat Yard on this page is adapted from an original photograph, copyright Des Blenkinsopp, at Geograph Britain and Ireland, made available under the Attribution-ShareAlike 2.0 Generic Licence. Any subsequent reuse is hereby freely permitted under the terms of that licence.