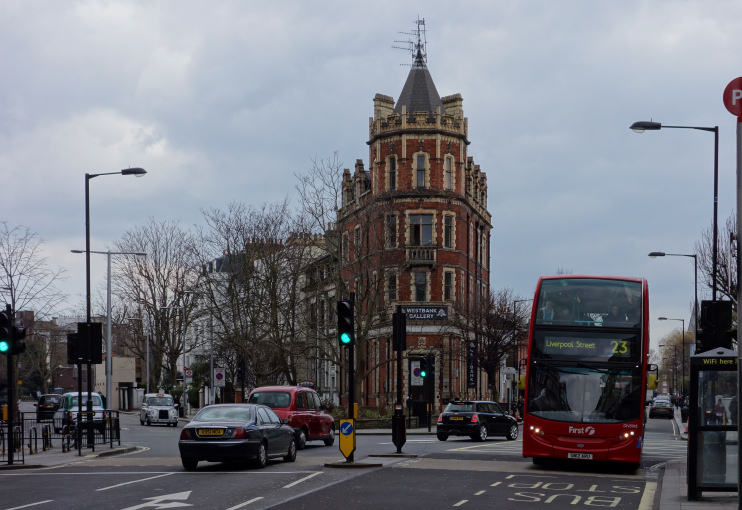 This is the smallest of the West­bourne local­i­ties, consisting of a single street and its offshoots, but it was the commer­cial heart of Bayswater in the latter half of the 19th century. The road was created in the late 1830s and soon extended. Cottages and villas lined both sides and most of these had front gardens.

From the mid-1850s shops began to replace the houses. Many of these ventures failed and the road was nicknamed ‘Bank­ruptcy Row’ when William Whiteley opened his first little shop here in 1863. Whiteley proved to be a very astute merchant and by 1876 he had acquired 15 adjacent shops, creating London’s first ‘great emporium’. This did not please smaller local traders and there was an outcry each time the store branched into a new line of business, much as there is today when super­market chains widen their ranges. Whiteley’s buildings were always myste­ri­ously catching fire but were soon rebuilt. William Whiteley was shot dead in his office in 1907 by a man claiming to be his ille­git­i­mate son and his legit­i­mate sons moved the store to Queensway in 1911, after which West­bourne Grove went into a decline.

In recent years antiques dealers and upmarket boutiques have recolonised the street, which also has a growing number of restau­rants with an exotic variety of cuisines. It is possible that West­bourne Grove will again become ‘the Bond Street of the West’ that it was once dubbed.

* The picture of Westbourne Grove near Chepstow Road at the top of this page is minimally modified from an original photograph, copyright Christina B Castro, at Flickr, made available under the Attribution-NonCommercial-NoDerivs 2.0 Generic Licence. Any subsequent reuse is hereby freely permitted under the terms of that licence.