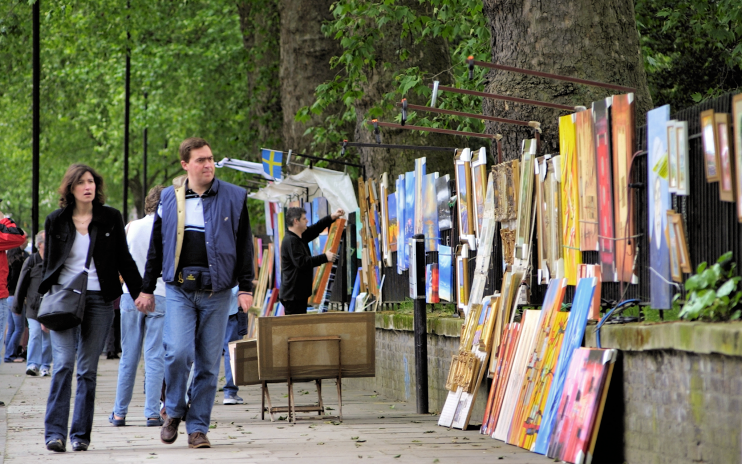 Bayswater began as a hamlet located close to present-day Lancaster Gate but the name now covers a wide area stretching west to Notting Hill, north as far as West­bourne Green and east to Paddington – or even beyond, to Marble Arch.

In 1380 this was Bayard’s Watering Place. The water was provided by the stream later known as the West­bourne. A bayard was a bay (chestnut) horse but some suggest the name may have come from a resident called Baynard. The hamlet was inter­me­di­ately known as Bayswa­tering, while Bayswater was first recorded in 1659, when just a handful of houses stood here.

Apart from some tea gardens, a lying-in hospital and the inevitable inn or two, Bayswater remained almost entirely unde­vel­oped in the 18th century.

Spec­u­la­tive builders began to grab the land here in 1809, led by Bond Street print­maker Edward Orme. Single and paired villas with gardens were initially the favoured types of dwellings but tree-lined, terraced avenues, squares and crescents rapidly extended the district in the 1840s and 1850s. A ‘splendid new town’ had come into existence by the time Bayswater station opened in 1868.

Artists and writers came here when the district was still semi-rural but were soon succeeded by more conven­tional members of the upper classes.

Bayswater was nicknamed ‘Asia Minor’ in 1885 and Indian fruits and vegeta­bles were on sale in the local shops, but the customers were military and admin­is­tra­tive profes­sionals with south Asian expe­ri­ence rather than immi­grants from the subcontinent.

Greeks and Jews also settled here, estab­lishing their own places of worship on Moscow Road and St Peters­burgh Place respectively.

Late in the 19th century some of the earliest houses were rebuilt, while others were replaced with flats. Hotels and mansion blocks made up the lion’s share of replace­ment building between the wars.

From the early 1960s some new hotels were added, while older ones were converted into flats. Also around this time an open-air art market began on Bayswater Road. Nowadays more than 150 artists display their work every Sunday from 10am to 6pm (see the photo­graph at the top of the page). Bayswater was desig­nated a conser­va­tion area in 1967, constraining subse­quent redevelopment.

Since the 1980s Bayswater has been the focus of a wave of settle­ment by Middle Eastern expa­tri­ates, who patronise the shops and services on Queensway and Edgware Road. The locality is also a popular place of residence for people from all over conti­nental western Europe.

West­min­ster council is presently cham­pi­oning the ‘regen­er­a­tion’ of Queensway into ‘Bayswater Village’. This will be spear­headed by the super-prime Park Modern project by the property devel­opers Fenton Whelan.

The engineer Rookes Crompton electrically illuminated his house in Porchester Gardens in 1879.

A ‘dry land sailor’ used to be known as a Bayswater Captain.

According to Sam Selvon’s modern classic The Lonely Londoners (1956), Bayswater’s West Indian residents used to refer to the locality as ‘the Water’.