Probably London’s most desirable address, Belgravia is a late Georgian estate of terraces, crescents and squares situated between Knightsbridge and Victoria 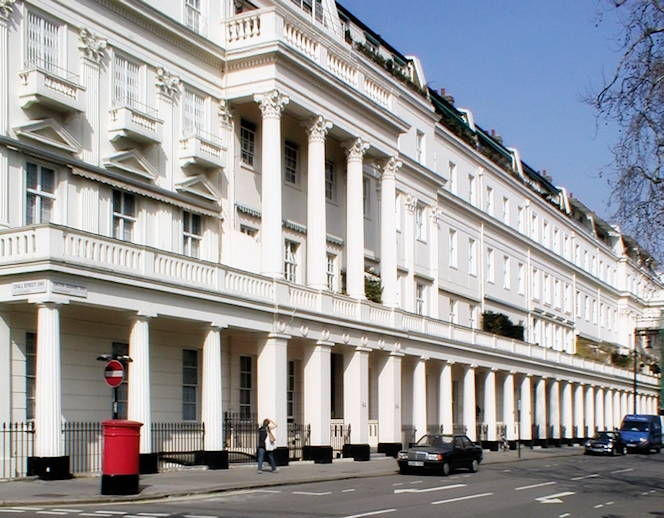 In 1677, at the age of 21, Sir Thomas Grosvenor of Eaton in Cheshire married twelve-year-old Mary Davies. In doing so he gained posses­sion of Ebury manor, which covered north Mayfair, Pimlico and Belgravia. Their son Richard laid out Grosvenor Square in Mayfair, but another century passed before his grandson Robert, 1st Marquess of West­min­ster, turned his attention to the land then known as the Five Fields, south and south-west of what is now Hyde Park Corner.

Prompted by the rebuilding of Buck­ingham House (now Buck­ingham Palace) and the housing boom that followed the end of the Napoleonic Wars, Robert Grosvenor began to develop the 200-acre estate in the mid-1820s and work on the project continued for three decades.

The Grosvenors, who still own the estate, also held the title Viscount Belgrave (from a hamlet on their Cheshire estate) – hence the name of the new district’s central square and by extension the name Belgravia.

The construc­tion of Belgravia was entrusted to the Norfolk builder Thomas Cubitt and his brother Lewis. Addi­tional work was contracted to a syndicate that included the architect George Basevi, who was respon­sible for much of Eaton Square (shown in the photo­graph above).

Cubitt excavated the marshy clay and made bricks from it, building on the exposed under­lying gravel. Some material was also brought from the exca­va­tion of St Katharine Docks.

The archi­tec­ture of Belgravia is remark­able for its grandeur and sense of unity – and because so much has survived intact. As well as providing resi­dences of the very highest quality, Belgravia is home to several embassies; the earliest to locate here was the Austrian Embassy, in the 19th century.

The estate’s most central shopping streets are Elizabeth Street in the south and Motcomb Street and West Halkin Street in the north. In addition to the inevitable galleries, boutiques, salons and estate agents, there’s even a conven­tional super­market (Waitrose, of course).

Chopin gave his first London recital at 99 Eaton Place in 1848.

The Grenadier pub, on Wilton Row, was once the officers’ mess for the Grenadier Guards. It is said to be haunted by the ghost of an army officer who died after he was flogged for cheating at cards.