A revitalised part of the former London docks, located between Wapping and the Tower 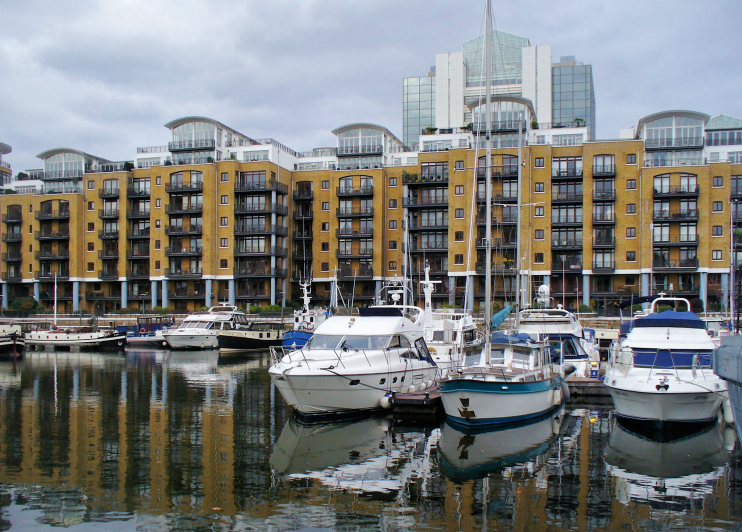 In 1147 Queen Matilda estab­lished a church-cum-hospital that adapted and survived here until the coming of the docks. During the Middle Ages the boggy land was frequently inundated when the Thames wall was breached, but in the early 16th century the marshes were drained by Cornelius Vanderdelft, allowing water­front devel­op­ment to begin.

The busy settle­ment that grew up here was torn apart after Parlia­ment passed the St Katharine Docks Act in 1825. Over 11,000 people were displaced by the works, which swept away slums like Dark Entry, Cat’s Hole and Pillory Lane. Construc­tion was led by the great railway builder Thomas Telford, in his only major project in London. Some 2,500 men were employed to move rubble and soil (including the remains from the church­yard) into barges that were then taken upriver by the contractor Thomas Cubitt and used as foun­da­tion material for prop­er­ties in Belgravia and Pimlico. Telford created the docks around two connected basins, giving an excep­tion­ally long quayside for such a small area of enclosed water.

Ware­houses were erected on the dockside, with roadways running directly behind – another inno­va­tion, which reduced handling and pilferage. St Katharine Docks opened in October 1828 and the last of the ware­houses was completed the following year. Addi­tional ware­housing was constructed in the 1850s.

With its tight security, St Katharine’s specialised in high-value exotic goods such as ivory, indigo powder, shells and feathers, as well as handling staples like tea and wool. The docks were wrecked by wartime bombs but limped on until their final closure in the late 1960s.

In the 1970s and 1980s St Katharine’s was rede­vel­oped in a pioneering mixed-use project that created private and public housing, offices and leisure facil­i­ties. The Dickens Inn was fabri­cated in antique style around the innards of a relocated warehouse, and a retracting foot­bridge was added at the entrance to the centre basin in 1994. With its yachts, cobbled causeways, cafés and shops St Katharine’s is a tourist attrac­tion by day, while the bars and restau­rants draw City workers at night.

Like many other Docklands quarters, the neigh­bouring housing displays a great disparity in wealth between its newcomers and the more estab­lished inhab­i­tants. The area’s ranking on the ‘depri­va­tion index’ is falling, but some residents remain in disad­van­taged circumstances.

* The picture of St Katharine Docks (East Dock) at the top of this page is adapted from an original photograph, copyright Colin Smith, at Geograph Britain and Ireland, made available under the Attribution-ShareAlike 2.0 Generic Licence. Any subsequent reuse is hereby freely permitted under the terms of that licence.