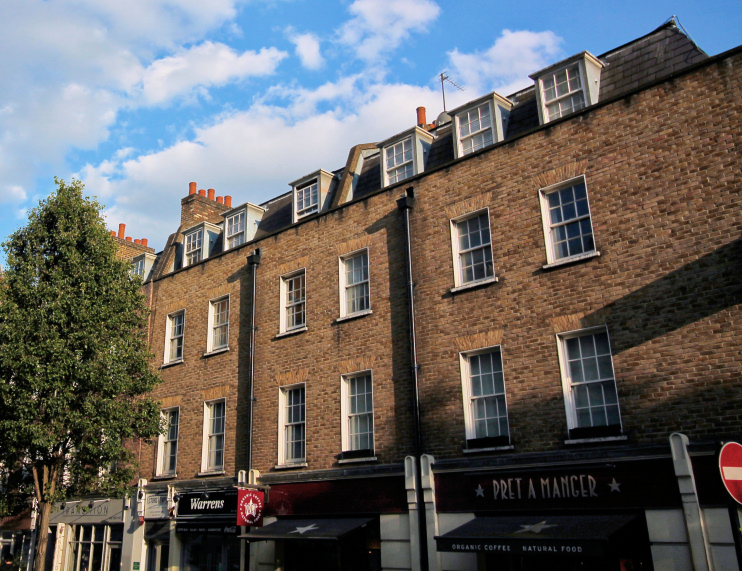 In the latter part of the 18th century this was an unnamed track providing rear access to the newly built prop­er­ties on what is now Euston Road. Warren Street itself was laid out with three-storey terraces in the 1790s by Charles Fitzroy, first Baron Southampton. Vari­a­tions in archi­tec­tural detail have led to sugges­tions that several spec­u­la­tive builders may have been involved in the project.

Fitzroy named Warren Street after his wife, Anne Warren (1737–1807). She was the daughter of Admiral Sir Peter Warren, who founded New York’s Greenwich Village and gave his name to more than one Warren Street in America.

Like other parts of what is now north Fitzrovia, the new street soon became a popular place of residence for artists, espe­cially engravers.

In the early 1880s the radical MP Sir Charles Dilke was accused of conducting an adul­terous affair in a rented room on Warren Street. George Bernard Shaw later suggested that this scandal had inspired his choice of the protag­o­nist’s name in his play Mrs Warren’s Profes­sion.

The street’s Northern line station opened in 1907, orig­i­nally as Euston Road, but this was changed to Warren Street within a year. The station’s 1930s stone façade is by Charles Holden. In 1967 Warren Street became the Victoria line’s southern terminus for the first three months of the line’s existence.

For much of the 20th century Warren Street was famed for its used car dealers, some of whom operated from showrooms while others simply sold dodgy motors parked on the pavement. Though trade was brisk, the street’s built envi­ron­ment dete­ri­o­rated because upper floors were often left unoc­cu­pied. The dealers departed in the late 1950s and early 1960s.

Samuel French’s theatre bookshop stood at the corner of Fitzroy Street from 1830 until 2017, when it was forced to close owing to “an unsus­tain­able rental increase.” There should be some kind of legally enforced rent control for shops over 100 years old, in Hidden London’s opinion.

Warren Street now possesses a diverse mixture of retailers and providers of profes­sional services. Among the most note­worthy insti­tu­tions is Tavistock Rela­tion­ships.

In March 2013 Camden council perma­nently closed Warren Street to through traffic, to prevent its use as a rat-run.

The mosaic murals on the Victoria line platforms at Warren Street feature a maze (in fact, a warren) created by Alan Fletcher. The labyrinth was designed to be hard to navigate in less than four minutes, thus setting a challenge to passengers: Can you escape before your train arrives?